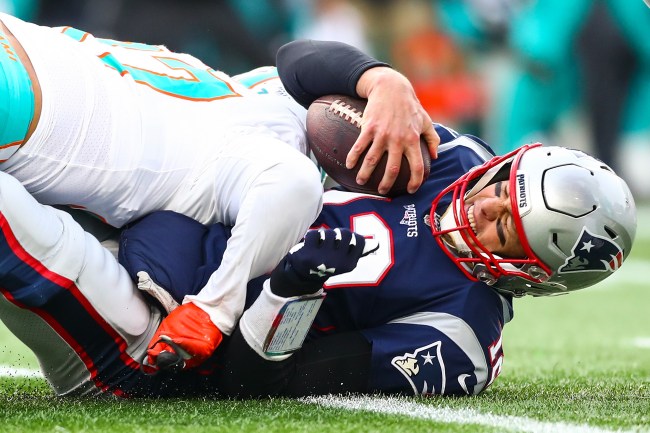 Shawne Merriman was one of the most feared men in the NFL for years. As a linebacker with the Chargers, Merriman was a 3x Pro Bowler, 2x First-Team All-Pro, NFL Defensive Rookie of the Year in 2005, and he led the league in sacks in 2006. Merriman and the Chargers faced Tom Brady and the Patriots in that 2006 season where led the league in sacks and when the two teams met in AFC Divisional Playoffs. The Pats won that game 24-21 despite Tom Brady being intercepted three times in that game.

Shawne Merriman was a guest this week on The Paulie and Tony Fusco Show, a podcast where the two hosts are playing (fake) stereotypical Eagles/Philly fans who claim to know everything about sports but simultaneously have the worst takes ever. Unsurprisingly, this premise works perfectly for a podcast. They’ve already had guests like Nick Swisher, Chris Broussard, Eric Mangini, and now they’ve got Shawne Merriman on the most recent episode talking about Tom Brady.

Around the 13:30 mark, they ask Shawne Merriman who the one NFL player is that he’d most love a completely open shot at and Merriman says it’s Brady without a doubt. He then goes on to describe how Tom Brady makes a unique squeal when he gets hit, a noise unlike any other players, and he gives you a blind stare that says ‘I’m Tom Brady and you weren’t supposed to sack me’.

The host asks Merriman “if there’s any quarterback throughout time who you could just get a free shot on, just run up and smash him, who would that person be?” Merriman responds with “the one and only Tom Brady. I wouldn’t choose anybody over that. And the good thing is about hitting Tom is he makes little noises that’s different from everyone else. And he looks at you like he’s not supposed to be hit.”

Merriman then goes on to describe the unique noises that the G.O.A.T. Tom Brady makes when he gets hit, saying “it’s like a squeal-moan kind of deal, not like a pig, more like a grunt-moan-squeal type of deal and then he’ll look at you like you’re not supposed to hit him which is even better.” The hosts then ask Merriman to describe what it would be like to get a completely clear shot on Tom Brady, what that sensation of hitting him would be like. This is something that no normal human being would ever get the chance to do so it’s pretty interesting to hear someone like Merriman discuss it.

He says “with the rules being the way they are you got to get your helmet out of the way because you can’t even breathe on anybody too hard without getting a penalty, but you definitely would lay on him just a little bit more and make sure you drive him to the ground because people forget it’s never the hit, it’s the lay. Remember that, it’s not the hit, it’s the lay.”

You can give it a listen here and take note around the 13:30 mark for the discussion about Tom Brady:

As a lifelong Tampa Bay Buccaneers fan who just had Tom Brady and the rest of the available NFL talent dropped in my lap I’m conflicted on what to do with this information because Tom’s my guy right now but it’s still hilarious nonetheless.

The podcast is incredibly entertaining, truly. The concept of an overly confident Philly sports fan throwing out hot takes is one of the most relatable things in sports and The Paulie and Tony Fusco Show nails it perfectly. Just hit that link to check out recent episodes on Apple’s Podcasts.