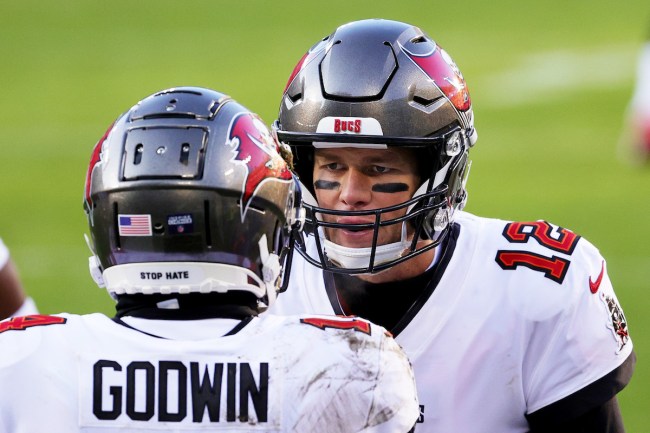 This Tom Brady fella is sort of good, guys. The 43-year-old is about to play in the 10th Super Bowl of his career this weekend, leading his Tampa Bay Buccaneers against the Kansas City Chiefs in a tasty matchup that should be exciting AF. And because Brady has been to the Big Game so many times, he doesn’t exactly get too excited about only reaching the Super Bowl.

Apparently, Brady won’t even let any of his Bucs’ teammates get emotional about playing in Super Bowl 55, either. That’s because, according to Tampa Bay linebacker Lavonte David, the quarterback told a guy in the locker room to stop crying after only winning the NFC Championship, reminding the player that the job of winning a championship wasn’t finished yet. Take a look below at the story David told the guys on the All Things Covered podcast with Patrick Peterson and Bryant McFadden.

Lavonte David says Tom Brady saw one of his teammates crying after they won the NFC Championship Game. Brady went right up to him and said: "What the f*** are you crying for? We're not done yet." 🐐

“When I realized that it was real — when I realized all other stuff don’t really matter unless it’s the Super Bowl was like after we won the NFC Championship … I’m geeked up and I guess somebody was crying, and I heard him (Tom Brady), just like, ‘What the (expletive) you crying for? We’re not done yet.’”

I don’t even care if this makes him come across as a total jerk, because I absolutely love this from Tom Brady. This, right here, is what makes him the GOAT — because he isn’t satisfied with conference championship trophies, and only cares about winning the Super Bowl each season. That’s what all the legends do.

The quarterback knows the job isn’t complete until he and the Bucs are standing on the podium at midfield on Super Sunday, hoisting the Lombardi Trophy, and he’ll be the first to remind every single one of his teammates the same thing. He’s never satisfied. He stays hungry. It’s something that rubs off on his teammates.

Michael Jordan did this to his former Bulls teammates. Kobe pressed his Lakers teammates to share a similar mentality. So Brady’s just following suit and reminding everyone in that Buccaneers locker room that just reaching Super Bowl 55 isn’t enough. The season’s only a success if they win it all.