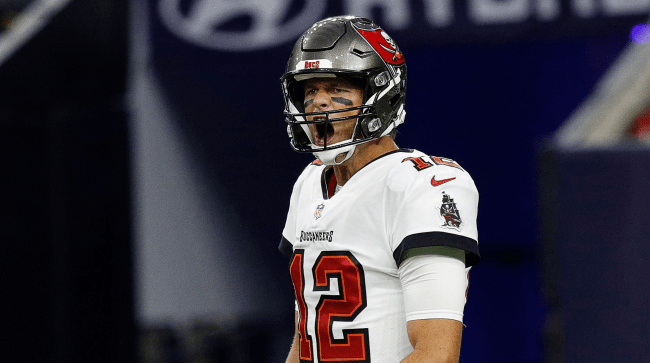 Tom Brady is 44-years-old. He’s been playing in the NFL for over two decades. He’s won SEVEN Super Bowls. So he’s long past giving a flip about ruffling feathers at NFL HQ.

Recently, Brady complained about how defenses were being penalized by the way the NFL is trying to protect offensive players from injury.

Then this week, Brady took aim at the other side of the ball, giving a very valid explanation for why he was so angry when the NFL announced a new jersey number rule back in April.

Related: Tom Brady Roasts Mike Vrabel: ‘He’s Kind Of An A–hole When You Get To Know Him’

Back then, Brady warned that the new rule allowing defenders to wear numbers that players at their positions were never allowed to have before will result in, as he put it, “a lot of bad football.”

On Monday, in an article for the Tampa Bay Times, Brady elaborated.

“The number rule is crazy,” said Brady. “Literally, guys changed their numbers today. I’m playing two guys who had different numbers in the preseason. So, yeah you’ve got to watch film and know who you’re studying but so do running backs. They’ve got to know who to block. So does the offensive line. So does the receivers who are adjusting their routes based on blitzes.

“So one guys has got a 6, one guy has 11, one guy has got a 9. And they change every play when you break your routes and get to your spot. It’s going to be a very challenging thing. It’s a good advantage for the defense, which that’s what it is.

“It would be like saying, ‘What if I let the offensive linemen wear 82 and No. 9?’ They wouldn’t know who was eligible. Well that’s not fair. You’ll get your tail kicked. At least identify who the D-line, the linebackers and the safeties are. You’re going to have a lot of matchups where guys are blocking the wrong guys. I don’t know why that should be.”

Brady continued, “There’s a reason why you do every single thing in football. And you study hard so you can put yourself in a good position. Now you get to the game, and you’re going to be confused the whole time because you’re rotating what a D-lineman used to look like versus a linebacker or here is what a safety looks like. Very pointless.”

He also thinks that the NFL front office and the people who make decisions such as the new jersey number rule should have spoken to players like him before implementing it.

“You know, like there are certain things that frustrate me and I say, ‘Well, this is something I should speak up about.’ Things as it relates to pro football, the unions,” said Brady. “And I’ve been around for 20 years to watch and I say, ‘Is it getting better or worse?’ And when I feel like it’s getting worse, I go, ‘What are we doing? This is not the purpose of the game.’

“But there are people who are making decisions who don’t have the same perspective. Not that mine is always right, but at least I want to feel like my point is heard, too. Because some of it is made just for the sake of making it.”

How this change affects offenses this coming NFL season, and if there will be a lot more blocking mistakes because of the new rule, will definitely be something to keep an eye on once the games begin for real this weekend.