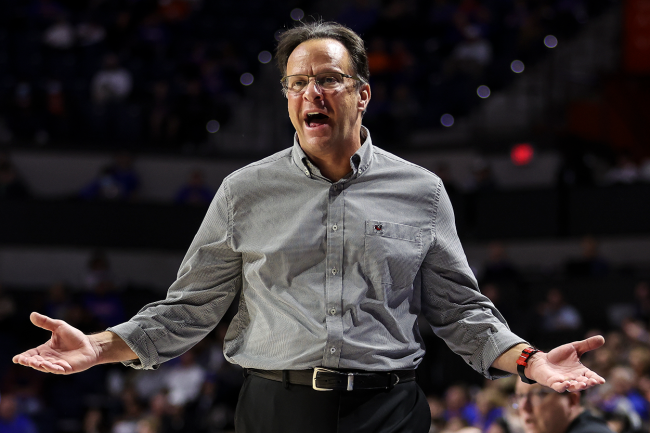 Tom Crean is currently unemployed. The 56-year-old basketball coach was let go by Georgia earlier this year and recently shared a hilarious video on Instagram that updates everyone on how he is doing.

Prior to being fired by the Bulldogs, Crean had been with the program since 2018. Before that, he spent time as the head coach of Indiana and Marquette.

All of that goes to say that he knows a thing or two about the world of recruiting. It would appear, however, that he might not be the most technically-savvy.

A recent TikTok video from one of Tom Crean’s recruiting visits while at Georgia has gone viral and it’s hilarious.

In the video, Crean is at an undisclosed high school gym, presumably to watch one of his prospects. While there, a student asks him a favor.

The student asks Crean to film him while he does a dance. Crean obliges and takes the camera, but still doesn’t film the student doing the dance.

Without having any idea, Crean accidentally kept the camera on the front-facing camera and filmed himself watching the student he was supposed to be filming doing the dance do the dance. It’s 15 seconds of first Crean’s hand, and then a close-up of Crean’s oblivious face as he watches the student do the dance.

Crean’s smirk is priceless and the way he asks if it was a TikTok at the end is pure gold. Take a look:

He was so proud of me ❤️ #foryou #viral #basketball #georgiabasketball

It might be the greatest college coach video of all-time and I say that with no hyperbole. Tom Crean is the gift that keeps on giving.