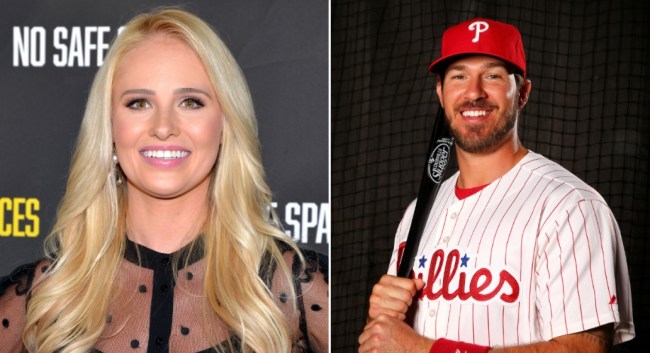 Tomi Lahren’s boyfriend, former MLB Player and current Fox Sports analyst J. P. Arencibia, was forced to apologize after he got annoyed with a comedian messing with his girl.

Over the weekend Jason Selvig of The Good Liars pranked Lahren when she thought she was posing for a picture with a fan instead Selvig asked her how she felt about Donald Trump losing the election.

Got to meet Tomi Lahren. pic.twitter.com/zEYEVoYKXe

Arencibia was pissed about the video and started threatening Selvig in his DMs.

Tomi Lahren’s boyfriend who is a baseball player/@foxsportsfl analyst is threatening to beat me up. Luckily, I looked up his batting average and I doubt he could make contact. pic.twitter.com/jMK2ZsOmpa

At first, Arencibia denied that he was threatening Selvig but would later apologize on Twitter for his behavior.

Threat? No threat there. We will meet again and have a conversation.

Guess it’s not cool to post the rest of the video when I confronted him shortly after and he 💩 down his leg. Unfortunately the world we live in no one wants to be exposed. But he knows what happened. 😨😨

Emotions got the best of me defending someone I care about. I apologize for sending the message, I will be better and focus on spreading more positivity.