Tommy Pham Is Now Lashing Out At Mike Trout, Calling Him The ‘Worst Commissioner In Fantasy Sports’ As His Bizarre Tirade Continues 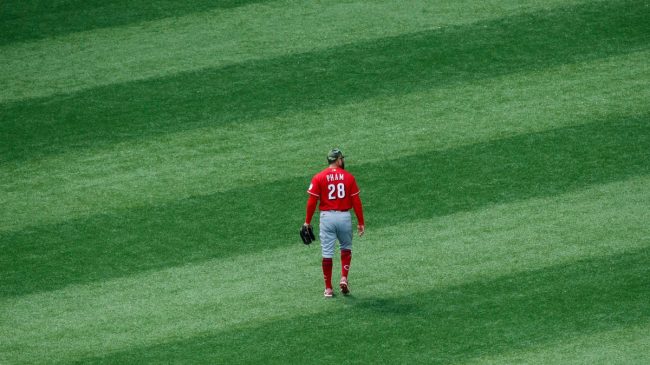 For those that missed it, Pham was videotaped slapping Giants outfielder Joc Pederson in batting practice last week which resulted in a three-game suspension. And what was the thing that set Pham off?

Pham was reportedly not happy with Pederson’s IR practices. Pederson says that he “put a player on injured reserve when they were listed as out and added another player.”

Pham claimed that this was against the rules that the league had set up prior to the season’s start, though Pederson says he has the screenshots to prove otherwise. But while that was the root of the issue, apparently, there’s more to the story.

Pederson also sent a GIF to one of their group messages poking fun at Pham and the Padres for missing out on the playoffs last season. Pham has since moved on to the Reds, but he’s not forgotten.

Pham hasn’t played since the incident, and he was scratched from the lineup on Tuesday for left calf discomfort, though he confirmed that his “hand is good.” And just when you thought the tirade was through, the Reds leftfielder ignited the flames once again.

Tommy Pham did not enjoy having Mike Trout as his fantasy football commissioner 😅 pic.twitter.com/uR1HNoDJ6g

Pham turned his attention to Mike Trout, calling him “the worst commissioner in fantasy sports” on Tuesday.

“Trout did a terrible job, man. Trout is the worst commissioner in fantasy sports because he allowed a lot of [stuff] to go on, and he could’ve solved it all. I don’t want to be the commissioner; I’ve got other [stuff] to do. He didn’t want to do it. We put it on him, so it’s kind of our fault, too, because we made him commissioner.”

He also didn’t hold back on Pederson, who Pham claims only told half of the story. He wouldn’t go into detail but alluded to there being more than what we’ve been led to believe.

“He sent a few [GIFs]. It’s more than one and I’ve got screenshots to prove it. He sent more than a few jokes aimed at me or the Padres. That was only one. There was about four of five. And we had rules to the IR. I know the ESPN app rule. We had our own individual rules.”