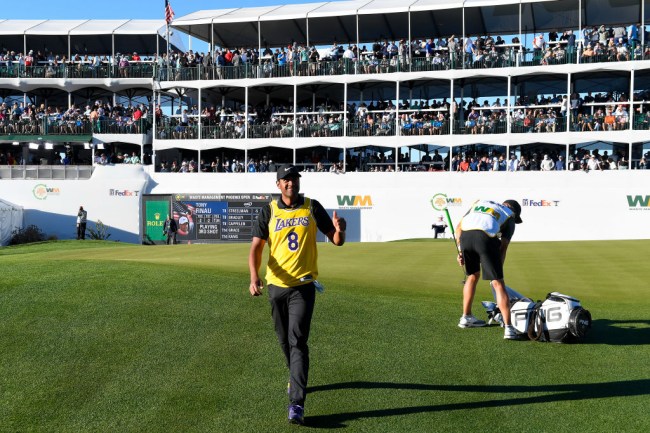 Tributes to the late Kobe Bryant, his daughter Gianna and the seven others that were killed in a helicopter crash this past Sunday have been seen all over the sports world including at this week’s Waste Management Phoenix Open.

The Par 3 16th at TPC Scottsdale is undoubtedly one of the most famous holes in all of golf thanks to the insane stadium setting and rowdy crowd. Players have always put on a show on this hole, but this week there’s been a bit of a different vibe as many Tour players have been paying their respects to Kobe by wearing Bryant jerseys as they play the hole.

Justin Thomas has Kobe themed wedges in the bag this week and wore a Kobe high school jersey earlier in the week while Tony Finau rocked a No. 8 Laker jersey himself.

Finau brought the jersey out of the bag yet again on Friday as he walked onto the 16th and was able to pay tribute to Kobe in an awesome, awesome moment. After just missing the green with his tee shot, Finau drained his lengthy birdie attempt and celebrated with a subtle shooting motion tipping his cap to Bryant.

What a moment. The Kobe jersey, the shooting motion after making the putt and on one of the most famous holes in golf. Awesome stuff from Tony Finau. pic.twitter.com/oQm0Rnsxgw

That right there is going to be a pretty tough moment to beat when it comes to Kobe tributes this week.

Fans at the 16th boo players that miss the green or walk away with anything other than a birdie, but they had plenty to cheer about as Finau walked off the green on Friday.

Related: Pepperdine Golfer Drains Tournament-Winning Putt While Wearing Kobe Bryant Jersey: ‘I Did It For Mamba’