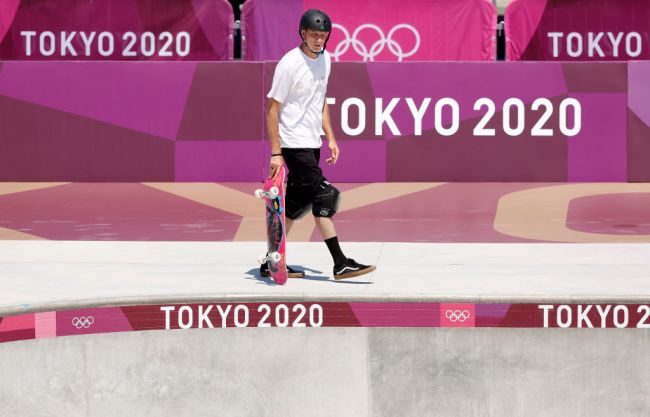 Skateboarding is set to make its Olympic debut this weekend and Tony Hawk is here for it. The 53-year-old skate legend is in Tokyo as an NBC Sports correspondent and even though he won’t be competing, he couldn’t help but get in on the action.

Hawk swung by the Ariake Urban Sports Park on Thursday to check out the site of skateboarding and BMX cycling events. Not long thereafter, he had a helmet on his head and a board in his hand.

There was no way that the greatest skater in history wasn’t going to test out the course himself. After tearing up the park, Hawk posted an edit of his run and looked like he could still take gold.

He also included some highlights from the men’s street practice to tease the event. Take a look:

Here’s my updated skate edit from Tokyo today, including some USA & Japan men’s street practice. Skateboarding is in the Olympics and I’m here for it… https://t.co/xEjwIUVndy pic.twitter.com/4LTeLdcpHx

Hawk has a moment:

Hawk, who never received the chance to compete for an Olympic medal, posted a very sentimental instagram caption with the video.

“As a kid that was mostly lambasted for my interest in skateboarding, I never imagined it would be part of the Olympic Games. It’s surreal to now be in Tokyo bearing witness to this milestone in the most unprecedented circumstances.

“I know in the end it will help to grow skateboarding’s profile internationally, exposing our passion to an audience that has never seen it before or simply refused to embrace it.

“A whole new generation will get to experience skateboarding with genuine public support and meaningful opportunity. I predict it will be one of the highlights from all of the Olympic Games coverage this year.

Hawk has been there before:

Although Hawk will not be competing in this summer’s Games, he has been involved in the Olympics before. He and a group of skaters performed an extreme sports exhibition during the 1996 Olympics in Atlanta.

And they wore some incredibly ’90s outfits while doing so.

Hawk officially retired from competition in 2003 and will be on the sidelines in Tokyo over the next two weeks. The skaters on which he will commentate, however, are poised to be in medal contention for the United States.

Click HERE for our full Olympic preview and ‘who to root for’ guide!