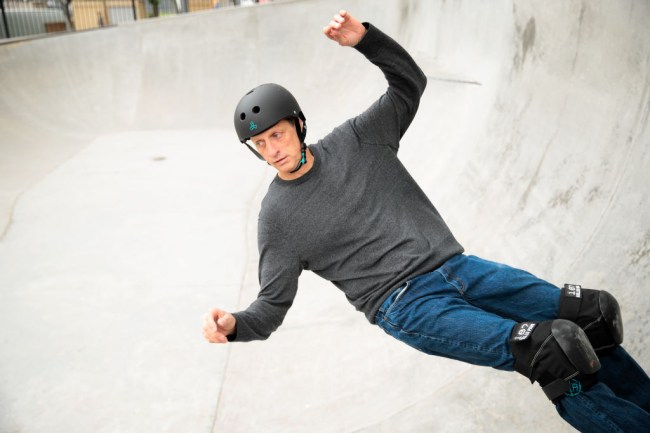 Tony Hawk is 52-years-old and still out there shredding up on a Saturday.

It doesn’t get any cooler than that.

With a new version of Tony Hawk Pro Skater in the works for next-gen Playstation and Xbox, Hawk is arguably more in his prime than ever, fresh off a big interview with Joe Rogan about his life and career.

In fact, in that interview with Rogan, Tony Hawk shared about the physical injuries and knocks he’s taken through his skating career – including how he got KO’d while skating with a fractured pelvis injury.

It comes up quite a lot throughout the interview, in fact, because skating is a sport that embraces its bruises.

I actually got KO’d once. I was leaning back more than I should have been. I thought I was balanced and then I found myself on my back, KO’d. And then another time… I was trying to get speed for a ramp and I had so much force on my tail that I broke it off. Going through the flat bottom of the ramp, I had my tail come off.

Because you can’t hold a man back from what he loves, Hawk told Rogan he basically need to relearn how to skate after that.

Hawk recently did a shred sesh at backyard pool. It ended with a trip to the emergency room, with his fingers bending in directions they shouldn’t bend.

In fact, his fingers looked like a Dr. Seuss character.

On Instagram, Hawk shared what happened over the weekend:

The session was fun until I did a backside smith stall as a set up for a backside blunt, and suddenly found myself on the flat bottom with my fingers bending in new directions. The coping was huge and I paid the price by hanging up on my back truck. In that moment, I regretted not wearing full pads. Ironically, that wouldn’t have saved me from injury but I was being too cavalier to think that a wall over 8’ with vert was as “safe” as a mini-ramp.

The session came to a screeching halt, and Riley drove me to the hospital like Ricky Bobby with a cougar in the backseat. Upon being admitted, a nurse checked my fingers and said they looked “dusky.” That expedited my care, and I was immediately assigned to a room as an x-ray machine arrived. Apparently, “dusky” is the color of extreme circulation loss. Within 30 mins, my fingers were back in place, and no longer dusky.

Here’s the pics he shared:

He got the X-rays as a keepsake of the afternoon. Turns out they had to completely cut his ring finger off to line up the bones:

“They had to cut my ring off before returning my bones to their full upright and locked position. My fingers are still sore / stiff / swollen but mostly functional.”

Here’s the X-rays he shared on Instagram, complete with an “I still love my job.”

What a legend. Gotta respect that he can just laugh off an injury like that.

Gotta imagine Hawk will be back in the skate park soon.

Nothing can hold that man back from doing what he loves, sans a full body cast. He’s truly the GOAT of his craft.

Do yourself a favor and watch his Joe Rogan interview. It’s a fascinating trip through his life.