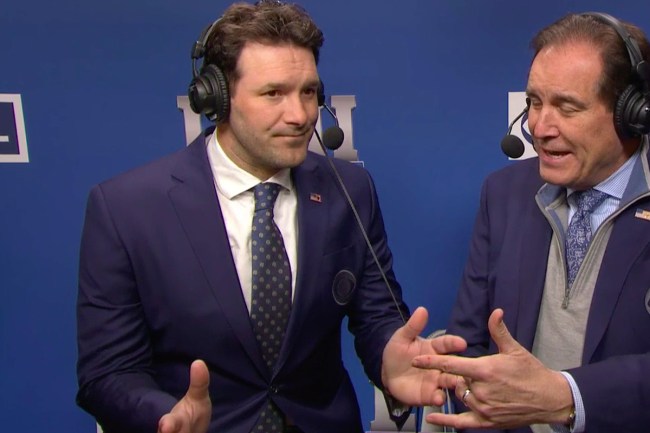 Tony Romo might be the hottest name in the NFL right now. Sure, while the former Dallas Cowboys quarterback may have retired a couple of years ago and made the transition into the TV booth with CBS, the Romo-meter is at an all-time high thanks to him putting his football knowledge on display during games each week. While Tony Romo has always earned pretty good remarks, the pinnacle came during Sunday’s AFC Championship Game when it seemed like Romo was actually predicting plays before they even happened, based off of tendencies he had seen on film.

Just take a look at some of his work from that game.

Outside of shocking everyone watch that Patriots-Chiefs game, Tony Romo has also been linked to some coaching jobs in the past few weeks, with his former team, the Cowboys, being the one most rumored. While that news never came to fruition, Romo did say that there are NFL teams interested in him — but it’s to play again, not to coach.

Talking to Richard Dietsch of The Athletic, here’s what Romo had to say about some of the inquiries he’s gotten from clubs. And, for the record, the guy is 38 years old, which makes him younger than Tom Brady and Drew Brees, and the same age as Eli Manning.

Per The Athletic, via Total Pro Sports:

Dietsch: “You are 38 years old, younger than some of the quarterbacks playing in the National Football League. When was the last time someone contacted you with a legitimate offer to play?

Romo: “There are legitimate contract offers and there are, “Hey, what are you thinking?” (laughs).”

Not sure what teams have reached out, but one would imagine it’d be some quarterback-starved franchise like the Washington Redskins after the Alex Smith injury and the San Francisco 49ers following the Jimmy Garoppolo injury. But, really, who the hell knows?

One other thing Tony Romo talked about was his success calling games, revealing the reason why he thinks he’s been so good in the booth, where others — like former Cowboys teammate Jason Witten — have struggled. Here’s what Romo had to say to The Athletic about that.

“I don’t pretend to have all the answers. I do think in some ways I have studied the game for 20 years and, at my core, I have tried to improve and get better at football. I think that has really helped me do this job, where I just know a lot of stuff that I have thought about over the years. It gives you a history…”

Sure, NFL teams may want to try and lure Tony Romo away, but with sources saying that CBS is open to giving him a “substantial raise” from the $4 million he currently makes, why consider taking another unnecessary hit from a 300-pound lineman? Romo’s clearly too smart to do something like that.