John Calipari, Nick Saban Among Top College Coaches Not To Take A Pay Cut Amid Pandemic 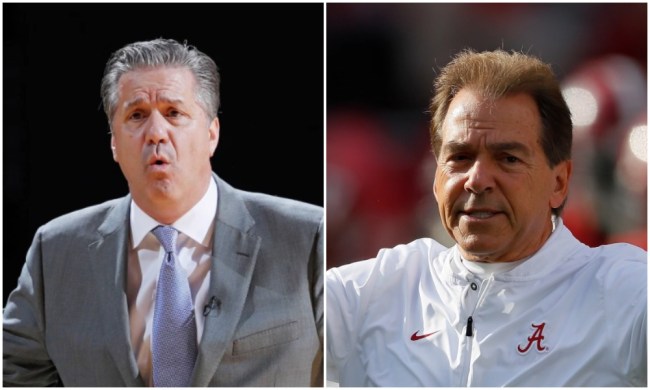 The U.S. unemployment rate fell to 11.1% in the month of June as the coronavirus pandemic impacted the workplace around the country. With the unemployment rate so high and the financial crisis impacting hundreds of thousands of people around the country, pay cuts became a major talking point among those fortunate enough to be in highly lucrative, mostly safe positions.

Major college football and men’s basketball coaches fall into that category, but most of the highest-paid, most well-known coaches have not taken a pay cut.

Universities and athletic departments are feeling the financial effects amid the pandemic as they are accepting taxpayer relief dollars while also cutting many Fall sports.

According to ESPN, the two highest-paid coaches in their respective sports, Dabo Swinney and John Calipari have not taken a pay cut. The two made $9.3. million and $8.2 million, respectively, last season.

ESPN contacted each of the 65 Power 5 schools and 10 other top basketball colleges and found that less than half of the schools – 33 of the 75 schools – have had at least one coach renegotiate their contract amid the pandemic.

When looking at each Power 5 conference, the Big Ten leads the way when it comes to both football and basketball coaches each taking pay cuts at their respective schools with 9 of the 14 schools doing so. The SEC has the lowest combination of head coaches taking pay cuts with only three; Missouri, South Carolina, and Ole Miss.