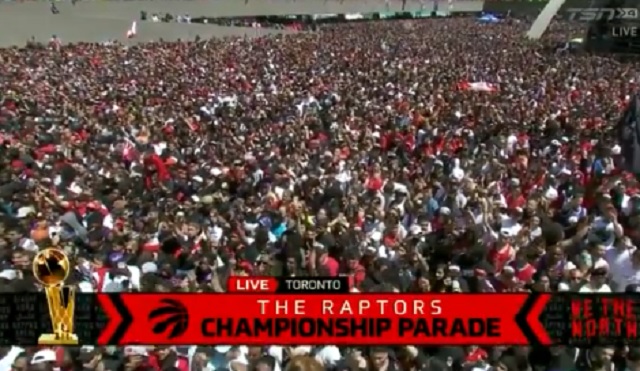 A scary scene unfolded during today’s Raptors NBA championship celebration when someone was shot in the crowd which lead to people running back and forth in panic.

JUST IN: Officials urging crowds to stay calm due to an "emergency situation" near Nathan Phillips Square.

Gunshots fired at the parade at the back south east corner of Nathan Phillips Square. One witness said four shots. Crowd ran. There is a victim down being given medical attention, surrounded by a crowd, and police are clearing people from the area. Speeches are still going on.

Have been hearing about someone being shot inside the mall as well as outside but this is not yet confirmed other than police tweeting reports of shooting. Men outside the Eaton Centre very upset about their friends or family possibly still being in the mall

We are being told by police to get down and stay down. The celebration is still going on at the front of the square. And fans are still screaming and running away behind on queen street.

Video showed the panicked crowd running from where the gunshots were heard.

And again. People running away from the right side. Not sure what’s going on pic.twitter.com/1fEoGoaVMl

ppl have been running from the back of the stage for some reason. hope everyone’s safe. #RaptorsParade pic.twitter.com/HRoeTZ4val

MORE: The crowd in Nathan Phillips Square panics after reports of gunshots in the south east corner. pic.twitter.com/XY8lipAK0f

Update there are two injured and are in “serious” condition and two people have been taken into custody.

UPDATE: Two shooting victims have been located with serious, but non-life-threatening injuries in Nathan Phillips Square during the Raptors NBA Championship fan rally. Two people have been taken into custody and two firearms have been recovered.