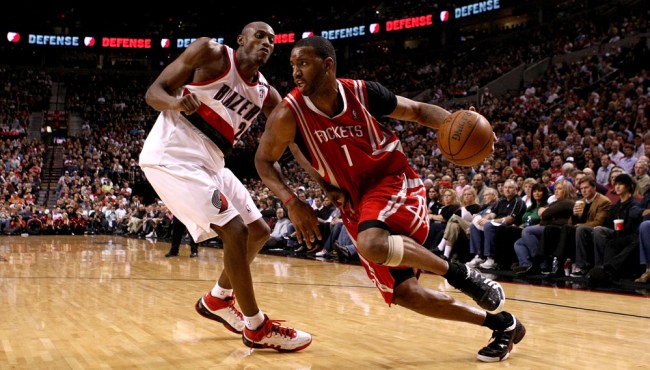 As sure as death and taxes, former professional athletes will continually talk about how much they would be dominating their game if they were playing in their prime today. And now we can add NBA Hall of Famer Tracy McGrady to that list.

While the 39-year-old McGrady doesn’t go so far as to say he could still play professionally at his current age, as others like a 55-year-old Jerry Rice, a 44-year-old Terrell Owens, and a 46-year-old Kurt Warner have done, McGrady’s hot take still has a few holes.

McGrady told ESPN’s The Jump this week that he thinks if he were playing in his prime in today’s NBA he would “easily” average 35, 40 points a game.

And while I do not doubt the fact that he would have been capable of doing such a thing, the logic he uses as to why certainly leaves something to be desired.

“I look at some of these high-scoring guys that are shooting a lot more threes than myself or Kobe shot back in the days,” McGrady explained. “Averaging probably 10 threes a game. I’ll average, easily, 35, 40 points a game. Easily. I mean I averaged 32 without even shooting that many threes… and you can’t impede my progress when I’m running?”

Okay, again, I have no doubt McGrady would average a boatload of points per game if he were playing today in his prime. The 6-foot-8 shooting guard/small forward had mad skills – skills that made him a seven-time NBA All-Star, a seven-time All-NBA selection, a two-time NBA scoring champion, and landed him in the Hall of Fame in 2017.

He holds a career scoring average of 19.6 ppg, which includes five seasons at the beginning and end of his career where he scored less than 10 ppg. His high-water mark was in the 2002-03 season when he led the league in scoring at 32.1 ppg. So it’s definitely possible he could have averaged 35-40 points today.

Now… as for his logic. There are some flaws, as Nick Schwartz of USA Today points out…

The math doesn’t exactly check out for T-Mac. McGrady took a career-high 7.7 threes per game during the 2003-04 season and averaged 28 points per game, which led the league that year. If McGrady matched Steph Curry’s current clip of 11.8 threes per game in 2018, he’d only be expected to score an additional four points per game on average. McGrady is a 33.8 percent career shooter from three, compared to Curry’s career mark of 43.7%. Still, McGrady would certainly benefit from the current defensive rules.

Throw in the fact that scoring in the NBA this season is way up, and sure, he might get 35 per game, but I don’t believe he could do it “easily.”

NBA scoring is way up so far this season.

Through the first eight full days of this season, teams are averaging 113.4 points per game, the highest rate in 49 years.@bytimreynolds #NBA https://t.co/mMZRy6J1OW

Of course, much like pretty much every other retired professional athlete, he’s more than a little bit biased when it comes to evaluating his own abilities.