We Almost Lived In A World Where Tracy McGrady Played With Allen Iverson On The 76ers Before Stephen A. Smith Screwed Everything Up 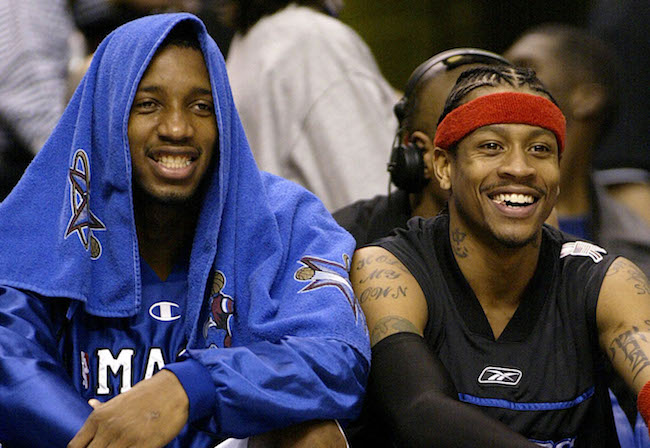 You can make a few arguments concerning the most impressive draft class in NBA history but I personally don’t think there’s any question that the crown belongs to the group of guys who were welcomed to the league in 1996 and firmly believe we’ll have to wait a long, long time before another challenger emerges.

The list of players who were picked in the first round features the likes of Steve Nash, Ray Allen, and Kobe Bryant in addition to number one overall pick Allen Iverson, who was scooped up by the 76ers following an impressive couple of years at Georgetown.

The 1997 draft, on the other hand, was a decidedly underwhelming one, and while recent Hall of Fame inductee Tim Duncan certainly lived up to the expectations that come with being selected first, the only other super noteworthy name (with apologies to Chancey Billups) was Tracy McGrady.

It didn’t take long for Iverson to announce himself to the world and immediately established himself as a force to be reckoned with on his way to winning Rookie of the Year honors, and after a few seasons, The Answer had helped Philadelphia go from the worst team in the league to playing in the NBA Finals in 2001 (although they were handily dispatched by the Lakers).

One of the most impressive aspects of Iverson’s time with the 76ers is how much he managed to achieve despite the incredibly underwhelming cast of teammates he was surrounded with while there (as highlighted by this ancient Bill Simmons column listing dozens of guys he played with you probably forgot existed).

However, things were almost very, very different if it hadn’t been for that meddling Stephen A. Smith.

Over the weekend, a tweet made the rounds concerning a proposed trade that would have sent McGrady from the Raptors to the 76ers in 1999 before the former Philadelphia Inquirer writer revealed the scoop in a column—a story Smith confirmed was true.

Sporting News did some digging and found the column in question in which he teases what would have been an impressively lopsided trade that had the potential to reshape the history of the NBA:

“76ers’ coach Larry Brown said he isn’t shopping second-year guard Larry Hughes, but it certainly seems that way. With Tracy McGrady a free agent this summer, the Toronto Raptors dangled their third-year forward to the Sixers for Hughes a little more than a week ago.

The Sixers, surprisingly, made the talks more intriguing by asking for a first-round pick with McGrady. The Raptors are presently contemplating the offer.”

Both men had Hall of Fame careers but finished them without having a championship to their name, and while there’s no telling if that would’ve been different if Toronto had pulled the trigger, this is one hell of a “What If?”