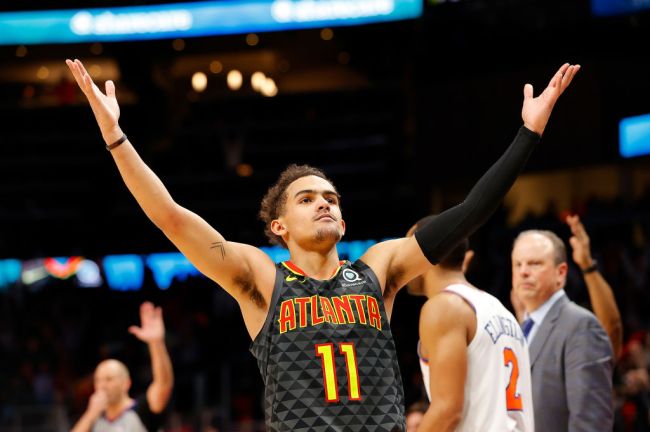 The Knicks may not have an answer for Trae Young. They certainly didn’t in Game 1 of their playoff series as he dropped 32 points, 10 assists, and delivered the game-winner with less than a second left on the clock.

Knicks fans loudly chanted ‘f-ck Trae Young‘ inside MSG during Game 1, but their pettiness shockingly wasn’t enough for the Knicks to overcome being, well, the Knicks. If the 15,000 fans allowed inside the arena on Wednesday night for Game 2 really want to get inside Young’s head, they need to focus on birds.

In a CBS Sports interview in 2017, Young went into detail about his fear of birds.

“You know how birds would be friendly to people? I hate birds,” Young said. “All you see is the ocean, the sand and birds flying over you. The birds trying to eat the crabs in the sand and they’re all next to you. I’ve seen a bird attack one of my friends at my high school in the parking lot. Yeah. It scared her. The bird was by her car, she tried to turn and get in her car but the bird was so scared it just attacked her.”

Oklahoma State fans tried the bird fear tactic back in 2018 when Trae Young and Oklahoma came to town. Young went on to score 48 points in that game, but the Pokes did win the game 83-81.

Some Knicks fans have already taken notice of Young’s fear of birds on Twitter offering up some hilarious ideas for ways to distract him via bird-form. If James Dolan wanted to see the Knicks win, he’d let a few pigeons sneak into MSG on Wednesday night, but that won’t happen seeing as how the pigeons don’t have a way to pay to get in the door.

Somebody find this lady & have her sit court-side for game 2 😂😂😂 pic.twitter.com/88WCHpdAVn

If fans cared about the Knicks at all, MSG will be filled with people dressed like this. pic.twitter.com/gDsU2lPQyA

Meanwhile in the Hawks locker pic.twitter.com/vhTMN3hAhd