Travis Kelce Made $750,000 On One Catch During Thursday Night’s Loss To The Chargers 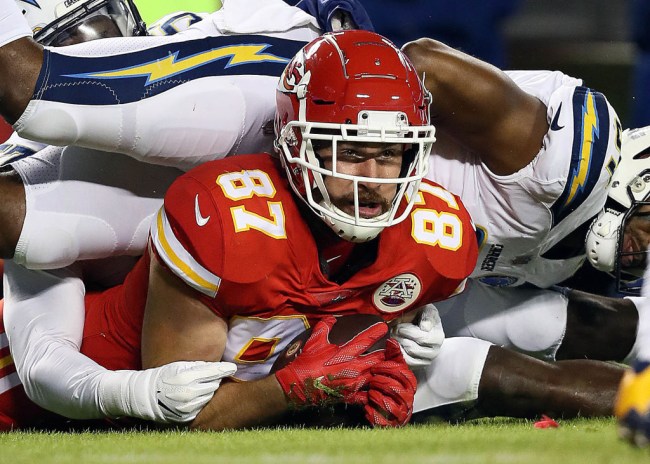 Chiefs’ tight end Travis Kelce was awarded a nice little holiday bonus on Thursday night when the 29-year-old hauled in a 15-yard pass from Patrick Mahomes early in the fourth quarter against the Chargers.

The catch put the three-time Pro Bowler over 1,000 yards for the season, earning him a $375,000 incentive bonus. Most of us would tell our bosses to piss off after the $375k hit out accounts, but Kelce’s incentive package featured a clause that made the otherwise ordinary catch financially lucrative. According to ESPN’s Field Yates, the incentive doubles because the Chiefs secured a playoff spot, making Kelce’s take home pay for the milestone $750,000.

On that play Travis Kelce just surpassed 1,200 receiving yards on the season, triggering a $375,000 incentive. The incentive doubles because the Chiefs have clinched a playoff spot. A $750,000 catch.

Not a bad haul for getting fantasy owners jack shit last night.

Kelce finished the night with seven catches for 61 yards in the 29-28 last second loss to the Chargers, but in the process became the first tight end in NFL history with 80+ receptions & 1,000+ receiving yards in three straight seasons.