Travis Kelce Reveals Why LeBron James ‘1,000%’ Would Dominate As An NFL Tight End 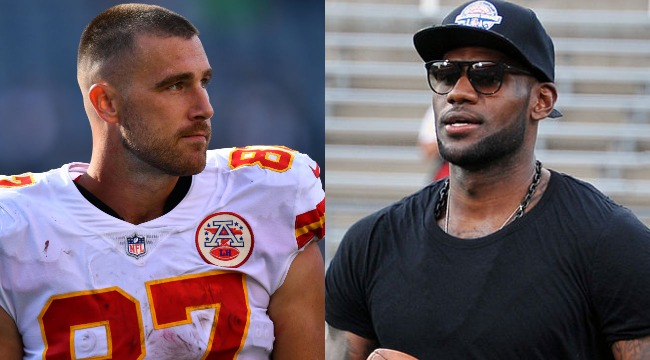 LeBron James’ football career, according to the man himself, was derailed by his high school quarterback putting him in precarious positions on the football field.

“If I would’ve had a better quarterback in high school, I might’ve continued to play football,” LeBron revealed to Eli, Peyton, and millions of others on last week’s Monday Night Football broadcast.

Six-time Pro Bowl tight end Travis Kelce weighed in on the never-ending debate on J.J. Redick’s Old Man & the Three podcast, not even hesitating when asked about whether LeBron would succeed in the NFL.

“One thing I’ve experienced being in the tight end room in Kansas City is we’ve had three or four come into the building just playing straight college basketball because the skillsets match up so well.”

“Basketball guys are always on their toes,  even when they’re sprinting, they’re on their toes. They’re not really taking big strides. And that’s one thing I think I’ve seen out of LeBron, his strides are enormous when he’s running and he knows how to play with acceleration and deceleration to have his own tempo throughout the game.”

***Retweet or Tag someone who plays both sports 🏈🏀***#HBT✊ pic.twitter.com/qRme13yHGc