Trevor Bauer The Second Pitcher This Week To Get Pulled With A No-Hitter Vs. Blue Jays: Reactions 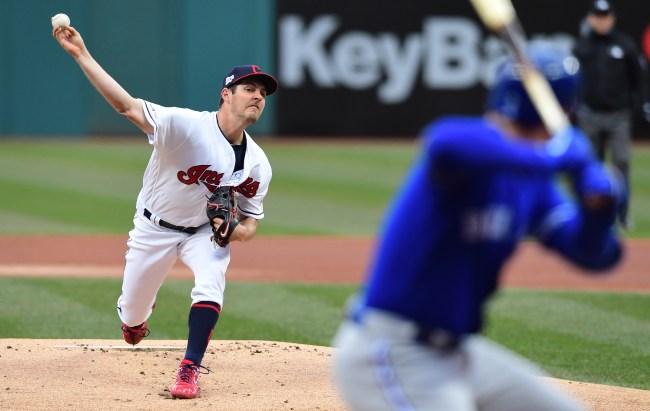 Cleveland Indians pitcher Trevor Bauer is off to an incredible start to the 2019 baseball season. The Toronto Blue Jays, on the other hand, are not. Like, not at all.

Monday night, Baltimore Orioles pitcher David Hess went 6-1/3 innings against the Blue Jays, faced just one batter over the minimum, struck out 8 and walked one on just 82 pitches before being pulled from the game with a no-hitter going.

Thursday night, Bauer went 7 innings, struck out 8 and walked 6 on 117 pitches before he too was pulled from the game versus the Blue Jays with a no-hitter going.

With that outing, Bauer became the fourth pitcher in 8 games this season to take a no-hit bid into the 6th inning against the sad sack Blue Jays, and has now allowed just one run on one hit through 14 innings with 17 strikeouts throwing some very, very nasty pitches.

Trevor Bauer loads the bases with no outs….

Then unloads a vicious barrage of breaking balls to get out of it (2ks and a fly out). pic.twitter.com/N5YXL6XPS6

However, unlike when Hess was pulled from his game, Bauer, the Dwight Schrute of Major League Baseball, says he was in total agreement with the decision.

Trevor Bauer when he gets pulled pic.twitter.com/V0bJEjkXWl

“I knew it was probably time to come out,” Bauer said following the game. “That being said, I think my velocity was higher in that last inning probably than all innings. My stuff was sharp. If I’d gone back out, I feel like I would have gotten it, but it’s a long season. We’re in the second week of it.”

Trevor Bauer has the belief he would've continued the no-hit trend if he went back out there but he knows the season is young. #RallyTogether pic.twitter.com/BzWfMkd289

“I didn’t want to take him out,” manager Terry Francona told the media. “He said he knew it was the right thing. I told him I hate it. He goes, ‘I hate it, too, but I know it’s the right thing.’ I care too much about him and this organization to hurt somebody. I would have loved to have seen it because I don’t doubt that he would have kept pitching and probably not given up a hit the way he was throwing.”

Terry Francona felt that he had to do the right thing for the Indians, which meant taking Trevor Bauer out of the game amidst a no-hit effort. #Indians pic.twitter.com/7fMZf8mn0N

Trevor Bauer became the 4th pitcher in baseball's modern era to be pulled multiple times with a no-hit bid of 6+ innings, joining: