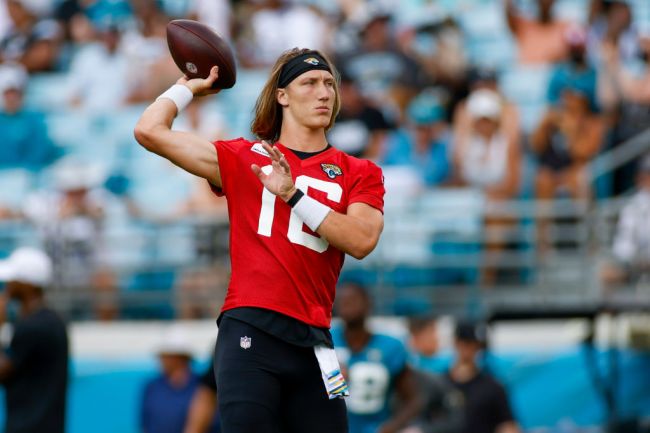 The Trevor Lawrence era has officially arrived in Jacksonville. As the Jaguars try to turn their franchise around with a new head coach and a new quarterback, there is a lot of pressure on Lawrence to perform right away.

Fortunately, all signs point to success from the 21-year-old, including a recent throw from training camp.

It is officially the time of year when football is on the horizon and everybody — media and fans alike — go a little bit crazy for clips from training camp. While it is important not to take too much stock in the hype, it’s a tradition unlike any other to go gaga over any little glimpse of the sport.

One of the throws that has garnered a lot of attention came on Sunday, Lawrence released a beautiful ball at the team’s open practice. It was beautiful.

Lawrence took the snap from the gun, ran a play-action counter to his left, pulled the ball, rolled to his right and looked downfield. He stepped into his throw with plenty of time and space (it is still camp after all), and launched a perfectly-thrown pass back to his left.

On the other side of the exchange, wide receiver Laquon Treadwell got on his horse to pull in the catch with out-stretched arms. It landed right in his bread basket.

Lawrence is technically battling for the first-string spot on the depth chart with Gardner Minshew entering the fall. However, there are very few realities in which he doesn’t get the job.

Should Lawrence be named the starter as expected, he will throw to his former Clemson teammate Travis Etienne Jr. out of the backfield, and primary wide receivers DJ Chark Jr., Marvin Jones Jr. and Laviska Shenault Jr.

Each of the “juniors” is talented in their own right, which makes Lawrence and Jacksonville an extremely interesting offense to keep an eye on. Especially if he keeps making throws like the one on Sunday— he’s going to be as good as advertised.