Trevor Lawrence Denies Reporter Who Asks To Catch His First NFL Pass, Proceeds To Throw It To A Random Warehouse Employee 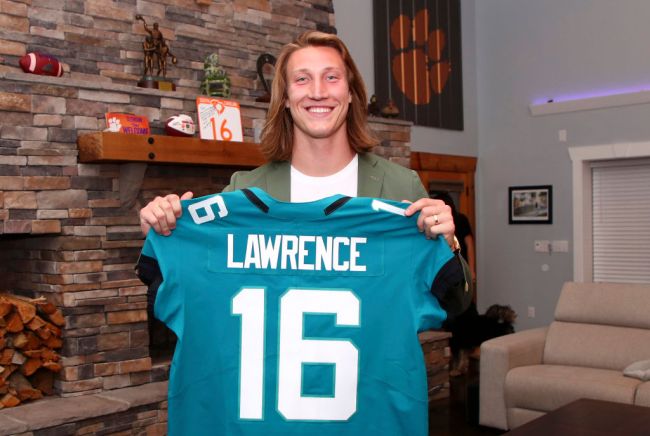 You know by now that Trevor Lawrence was drafted No. 1 overall in the 2021 NFL Draft by the Jacksonville Jaguars. Since the pick was announced, the 21-year-old from Tennessee has been running the media gauntlet and has done an innumerable amount of interviews. Last Friday, after arriving in Duval, he spoke with NFL Network’s James Palmer at TIAA Bank Field.

After chatting for awhile, Palmer presented him with a “great opportunity.”

“I want to catch the first pass you ever throw as an NFL player,” he said, as he handed Lawrence a football. “What do you think, you ready?

“I don’t know, man, I think I’m going to save it for some of my new teammates,” Lawrence replied, seemingly caught off guard.

“Alright, hey, you gotta shoot your shot, I tried,” Palmer said in response.

Lawrence handled the slightly awkward moment like a pro and let out a harmless laugh, saying that he’s “excited” to have one of his new Jags pass-catchers be on the receiving end of his first professional throw. It was definitely not a particularly comfortable moment for everyone involved.

Trevor Lawrence is everything that is advertised. How will he handle the pressure? How much of a jump does he have on the playbook with knowing he was going #1? And would he throw me his first pass as an NFL quarterback? My report on @nflnetwork pic.twitter.com/wC1qIdcdAf

Fellow NFL Network analyst Mike Garafolo even roasted his coworker for how it went down.

“I haven’t cringed at a rejection like this since the answering machine scene in Swingers,” he tweeted.

Shortly after his introductory activities with the team, Lawrence and his wife Melissa teamed up with Fanatics to surprise some of their employees at a local manufacturing facility in Jacksonville. While on-site, they helped to make some of his first merch, for which orders were coming in FAST. Fanatics said that the former Clemson signal-caller DOUBLED the previous record for sales by a draft pick during the first round of the NFL Draft. DOUBLED!!!!

After the shirt was all crisp and clean, Lawrence did something that he said he wouldn’t do. Just hours after telling Palmer that his first NFL pass was reserved for his teammates, he dropped back and tossed his first NFL pass to a Fanatics employee.

Trevor Lawrence didn't waste any time getting his hands dirty in #DUUUVAL!

He made his own merch at @Fanatics HQ and threw his "first pass" as a Jag! pic.twitter.com/4FyBXFfjL3

The conspiracy theorist in me wonders whether perhaps it was in Lawrence’s contract with Fanatics that his first pass would be thrown in the warehouse. It would certainly explain some of the awkwardness during the interview— Lawrence having to cover up his deal and all.

Maybe not. Either way, it’s an absolutely brutal beat for Palmer.