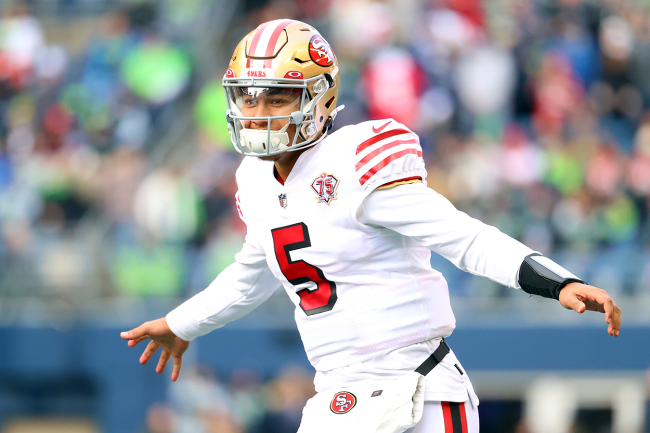 As Trey Lance gears up for what could be his first season as a full-time starting quarterback in the NFL, he is continuing to put his faith in God. Lance shared that he has finished his back tattoo and the intricate details are insane.

Ever since the 21-year-old quarterback started to make waves at North Dakota State, he has been very vocal about his religious beliefs. That isn’t to say that he hasn’t always been that way, but once he started to receive a platform, he vowed to use it to further his faith and beliefs.

“Football is not who I am, it’s what I do,” Lance said during a press conference back in 2020. “I’m obviously going to put everything possible into it because that’s what I love to do. But at the end of the day, I think God put that in my plan to use it as my platform.”

While in high school in Minnesota, Lance emerged as a leader in his local Fellowship of Christian Athletes chapter.

“His identity is not being a football player,” Southwest Minnesota FCA staff member Robin Knudson said of Lance to Yahoo Sports. “It comes from something greater. That helps him stay grounded.”

Trey Lance agrees that while football is his passion, it is even more so a platform for him to let God live through him.

“As far of my platform at the next level, [I’m] just realizing that we’re not put on Earth to be football players or to be doctors or lawyers or whatever it is,” he said in the same interview with Yahoo.

In addition to his vocalness about his faith, Lance has reminders with him at all times on his body. He has three crosses tattooed on his right shoulder and has ‘Romans 8:28’ written in words and roman numerals on his chest.

“And we know that in all things God works for the good of those who love Him, who have been called according to His purpose,” Romans 8:28 reads.

Back in February of 2021, Lance shared his most recent tattoo, which stretched across the top of his back and reads “CHILD OF GOD.”

Now, just over a year later, the 49ers quarterback shared that he has made progress his massive back tattoo. It features a lion on the left side and Jesus Christ on the right.

The intricate details are insane.

Lance will continue to put his faith in the Lord as he gears up for 2022 and what could be a quarterback battle in San Francisco this summer.