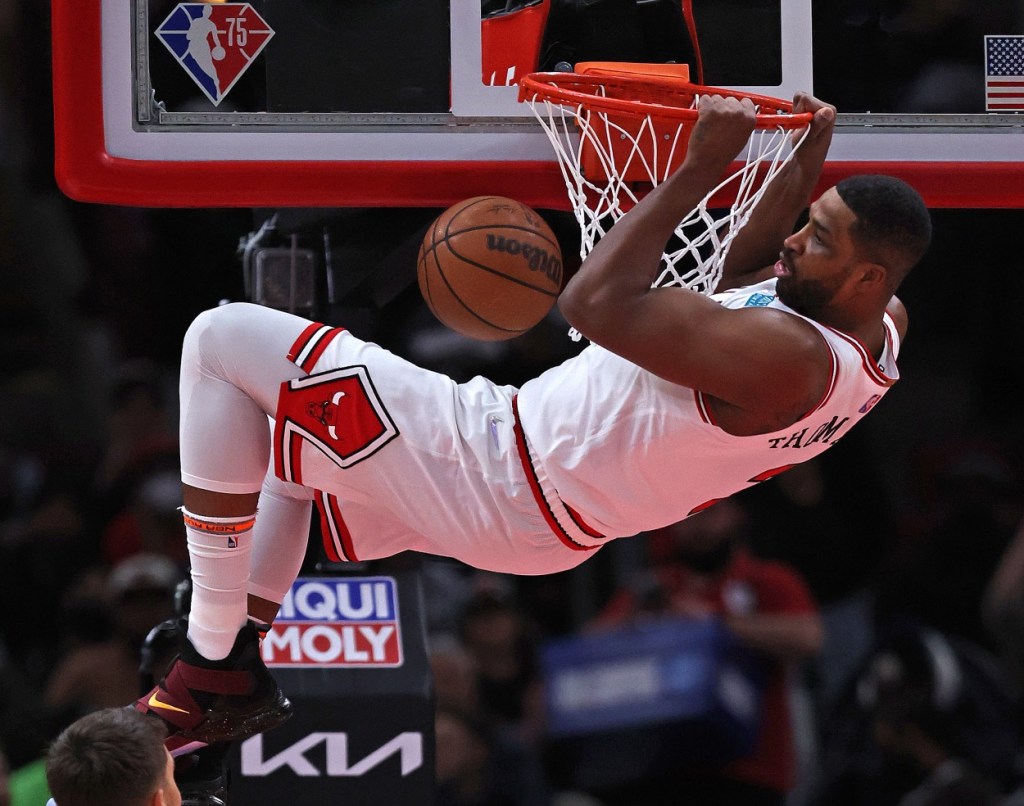 The Milwaukee Bucks face the Chicago Bulls (on Friday evening) for the first time since Grayson Allen committed a dangerous and violent foul on Alex Caruso back on January 21st. Former Duke Blue Devil Grayson Allen was widely criticized by NBA fans and players for that dirty play

Allen was later suspended by the NBA for just one game despite the foul leading to Caruso breaking his wrist, an injury that’s left Alex sidelined since then.

Tensions and tempers will be running HOT on Friday when these two teams match up in Chicago. Bulls center Tristan Thompson was asked on Thursday night about facing Grayson Allen for the first time since the dirty foul that took out Caruso and his comments suggest there’s a potential that blood gets spilled on the court. He literally said ‘blood’, I’m not putting words in his mouth.

Tristan Thompson Is Eager For Blood In Game Against Grayson Allen

Here’s the full quote from Tristan Thompson ahead of the Bucks-Bulls matchup:

“Sh-t. Take one of my dogs out like that, we’re gonna have issues. You gotta set the tone. That’s what Bulls basketball is about, setting the tone. What he did affected one of our guys, and I don’t think anyone should forget about that. So I’m pretty sure the United Center is gonna be rocking (Friday). I think guys have (it) in the back of their head. And if guys wanna play chippy, let’s play chippy. I like it. I like a little blood and sweat, so I enjoy it.”

For anyone out there that’s forgotten how egregiously bad that foul was, here it is again to jog your memory:

What Do NBA Fans Have To Say About Tristan’s Comments?

This how Tristan Thompson gonna show up to the United Center just to drop 2 pts 4 rebs and 5 fouls for Alex Caruso pic.twitter.com/C76e7tFL4V

Bro you’ve been in Chicago for like a week https://t.co/bveKbSUDc1

Wish this dude was here when that happened. https://t.co/9Hy0HEanu8

As for the likelihood of anything happening between the Chicago Bulls and Milwaukee Bucks, I’d put the chances at maybe 5% that something actually happens and a 95% chance we get another classic “hold me back bro” NBA “fight”.