Troy Aikman Thinks It’s Too Early For The Cowboys To Tank, Is Still High On The Bucs, And Tells Us Why Guac Is The Perfect Super Bowl Food 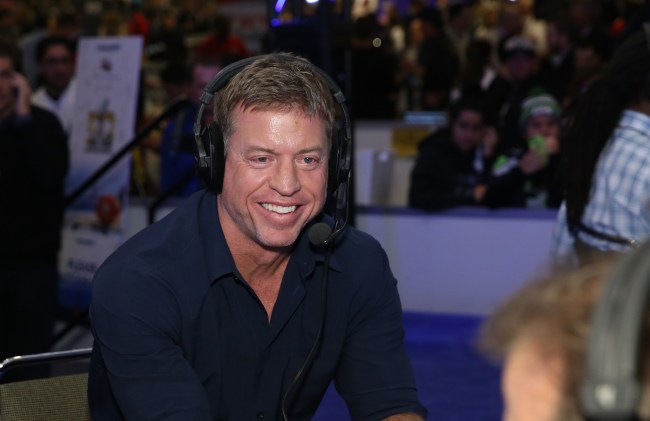 We sat down with Fox Sports broadcaster and Hall of Fame QB Troy Aikman to get his thoughts on the Cowboys’ season, Garrett Gilbert’s performance, and where Tom Brady and the Bucs stand after their blowout loss to the Saints.

We also talked to Troy about his partnership with Avocados From Mexico where he’s promoting their “Make The Big Game Your Bowl Game” Super Bowl campaign which will feature in-store engagement contests that will give fans a chance to win $1 million and other cash prizes or a personalized message from the Cowboys legend just by scanning a QR code.

Last year, Aikman was calling the Super Bowl with Fox in Miami but this year he’s going to be watching the game at home and his homemade guac made with Avocados from Mexico is going to be the front and center at his Super Bowl party.

“Avocados are so good for you that I try to incorporate it in everything that I do. I was surprised when I got involved with Avocados From Mexico I didn’t know this, but eight out of ten avocados in the United States come from Mexico, and it’s because avocados in Mexico are always in season, so they’re always able to supply them during the biggest time of the year which is obviously around the Super Bowl with all of the Super Bowl parties.

I have a Super Bowl party when I’m not calling the game, we called the game last year, so we didn’t have the party but this year we’re throwing one and guacamole is a big part of that.

And I’m not a great cook, but I will tell you that my guacamole, I put my guacamole up against anyone and yeah, it’s pretty good, and if you like it spicy, then you’d love mine.”

As of right now, it doesn’t appear that Troy is going to be watching the Cowboys when the Super Bowl comes around, but he was impressed with team’s performance against the undefeated Steelers on Sunday.

“The Cowboys play against the Steelers on Sunday was a real encouraging sign, and I and I would hope that the players feel pretty good overall about that. Next week is their bye week, so they get a chance to take a mental break and then see what they did well and kind of lock-in on some of those things and then go into the second half of the season,

So we’ll see, I think, some of the things that they did on Sunday against Pittsburgh, I think they went into that game recognizing that that Pittsburgh was a really good football team and they had to do some things to try to steal some possessions or get field position in their favor. And in some of those things worked out pretty well for them.”

While many Cowboys fans are calling for the team to tank for a high draft pick, Troy thinks it’s still way too early for that considering the team is still only a few games out of the division race despite their 2-7 record.

“The fact that they’re still in the division race, you continue to play to win and all that, and I think you always do. I don’t know if there’s ever a time when you’re not playing to win, but if they were in another division to where you’d look at it and say, hey, you know, our season essentially is over and we’re not going to make the postseason. Yeah, I think most clubs and at that time would begin to look at some younger players that you feel good about, you think may have a chance.

They just need some playing time and some experience where in the middle of a playoff race, you may not necessarily play those guys you would in other situations. So maybe we’ll see some of that as we move through the second half of the season. But I think right now it’s all hands on deck, just trying to win games and see if they can’t win the division and get into the postseason. Yeah. I don’t know about that”‘

Troy was particularly impressed with the play of backup QB Garrett Gilbert, who he had seen before a few years ago when he was Garrett was trying to make the Carolina Panthers squad.

“I was in Carolina a few years ago when he was with them in the OTAs and got a chance to watch him up close and visit with him a little bit. I really like him. I think he’s a really talented guy. I thought that for his first NFL star to play against a really good defensive football team and I thought he showed great poise, would never have known it was his first start, seem to have really good command of the offense and got what they were wanting from him and what he needed to do.

So, yeah, I like him. I don’t know what Andy’s (Dalton) situation is going forward. My guess is, at least from what I heard Stephen Jones says, that Andy would be the starter when they resume play.

This was a nice start for Garrett and from my perspective and for him personally, it was good because now he’s shown other teams that he can go in against a really good defensive football team without a ton of practice and played a pretty good level and hopefully that will open some doors for him, if not in Dallas, some other teams where he’ll be able to further his career. I know as a backup when it’s a great job until you have to play and then when you play, if you don’t play well, they’re looking for another backup, and if you do play well, then you show that, hey, this is a guy who can step in and do the right things when we need them too.

Last week’s big game of the week between the Bucs and the Saints ended up being a dud when Tampa Bay lost by 35 points to New Orleans. Despite the fact Tampa Bay got blown out in Antonio Brown’s first game with the team, Troy still thinks they’re very good on both sides of the ball and will be a contender throughout the season.

“There was miscommunication between Tom and Antonio, just the fact that they haven’t been playing all that much together. They had a little bit of time there in New England together, a little bit of time here in Tampa Bay. I mean, it’s going to take some time, but, yeah, that was a bit of a surprise. We had that match up on Fox in week one, the Saints and the Bucs and New Orleans, of course, won that game. Tampa didn’t play particularly well and then they got to where they were playing pretty good football.

I expected this one to be a lot closer game even than the one we had back in Week 1. It obviously didn’t work out that way, but I think Tampa has shown signs that they’re capable of playing at the level that we all expect but it’s been a big adjustment. It’s been a big adjustment for Tom in how they are doing things offensively and it’s just it’s just taking a little bit of time, but overall, that was a game they’d like to throw out.

I still think Tampa is a good football team. I don’t think there’s a lot of teams when you look at them around the league that are really talented on offense and defense. But Tampa is one of those teams.