Troy Aikman Blisters The Cowboys: They Need A ‘Complete Overhaul’ Of Their ‘Dysfunctional’ Organization 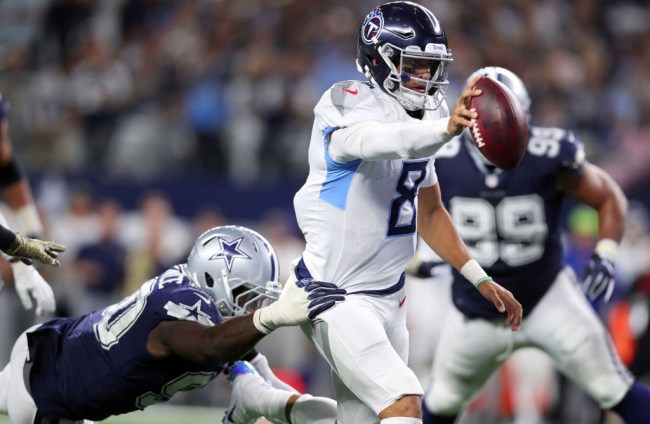 In the wake of another embarassing loss on Monday night versus the Tennesse Titans, a home game in which they were five-point favorites, former Dallas Cowboys quarterback, Hall of Famer Troy Aikman went off on the organization he once helped make great again.

During his weekly appearance on “The Musers” on 1310 The Ticket on Tuesday morning, Aikman didn’t hold much back in his assessment of the underachieving Cowboys.

Within seconds after making a shocking small-talk admission that he’s never seen a Star Wars movie, Pro Football Hall of Famer and lead Fox analyst Aikman stepped to the pulpit and went scorched Earth on what he regards to be a “dysfunctional” Cowboys organization. As during his quarterbacking days, the greatness of Aikman the broadcaster is his ability to criticize without raising his voice.

“I’ve always believed prime-time television, at home, if you’re anything that you believe that you are, you win those games,” he said of the Titans debacle. “And they didn’t look very good.

“As I was watching that game and then it was apparent that they were going to lose, “I thought to myself, ‘Wow, I really can’t remember or think of a loss that is this bad, at this point of the year.’ There’s no question it was a terrible loss.”

Aikman also addressed the team trading a first-round pick for wide receiver Amari Cooper, saying, “They spent a first-round pick in order to bring in Amari Cooper because they acknowledge that they made a mistake. When you make those changes, it’s not seamless. It basically is an admission that, you know, ‘We’re screwed up.'”

As for whether owner Jerry Jones might be looking to replace head coach Jason Garrett, Aikman doesn’t think he will.

“Go through the list and this team, over a long period of time, has been what it’s been,” Aikman said. “It hasn’t always mattered who the head coach has been. So to me, if you’re asking me, I’d say there has to be a complete overhaul of the entire organization. You can’t just can’t simply replace head coaches and say, ‘Now it’s going to be better.’ No, it’s been shown that it’s not better. And you have to address how everything is being done.

“And there’s been times where I’ve heard Jerry say, ‘OK, look, we’re going to do it differently. I’m going to do it differently.’ But it’s the same. Nothing changes. And that to me is the bigger issue, beyond, ‘Yes, coaching’s important, personnel, all those things are important, but how are you going about evaluating? How are you going about running the organization?”

For what it’s worth, Jones himself says he isn’t planning on making any major coaching changes, even after falling to 3-5 after the loss to the Titans on Monday night.

#Cowboys Owner Jerry Jones tells me he does not anticipate any coaching changes. Not a head coach change, not an offensive coordinator change in season.

Sounds like Aikman hit the nail square on the head when he called the Cowboys “dysfunctional.”

But hey, chin up, Cowboys fans, at least you still have the best cheerleaders, which is nice.