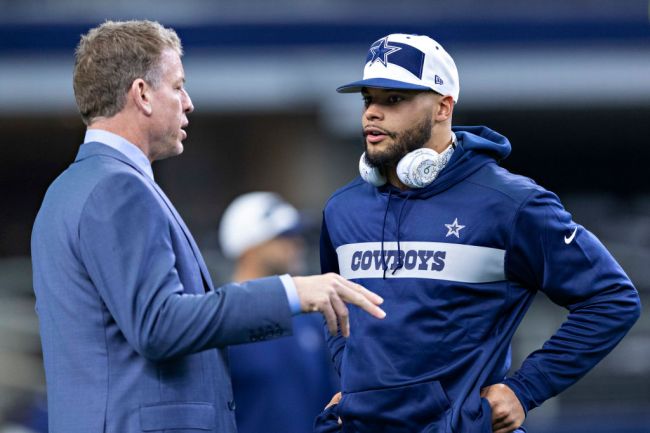 Prescott did not play during the Cowboys preseason opener on Thursday night but made an appearance on the FOX halftime show to say that the team was just being cautious with his shoulder injury.

Cowboys QB Dak Prescott tells halftime show he's being "cautious" with shoulder to get himself right ahead of season opener vs. Bucs. 5 weeks away. pic.twitter.com/BaMvqh3V1p

We’re being cautious,. “We’re taking it day-by-day. We’re five weeks before the season opener, so I’ve got a lot of time. And I’m going to use that time to get myself ready for that game.”

During the game, Aikman commented that he felt the team was “downplaying” the injury in public but he thinks it’s a bit more significant than they’re letting on considering how much time he’s been away from the field.

Earlier this week the Cowboys announced Prescott “has been limited to non-throwing drills the past week because of a strained shoulder muscle” and there’s no timeline for his return to the field after he felt tightness and soreness that was described as “atypical.”

According to Jay Glazer Prescott’s injury is under the shoulder and the team fully expects him to start during week 1.

Here is the latest on the Dak Prescott and Carson Wentz’s injuries, and how likely is it that Deshaun Watson stays with the Texans all season. #NFL #News @NFLonFOX #Wentz #Dak #Watson

Hopefully for Cowboys fans, Aikman is wrong with his assessment about Dak’s injury and he’s back before the start of the regular season.