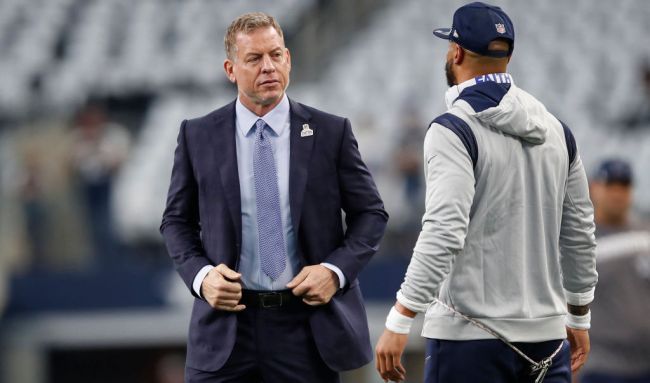 The sports media world has, obviously, spent a majority of the week lampooning the Dallas Cowboys for their performance against the San Francisco 49ers, who upset the Cowboys on their home turf by a score of 23-17.

The harshest criticism, though, may very well come from a former Cowboy, as Hall of Fame quarterback and current Fox lead color commentator Troy Aikman had some harsh words for the organization, which he brutally compared to the Jacksonville Jaguars and the New York Jets, far and away two of the league’s most moribund franchises.

“I mean, it’s hard to look at any regular season and say, ‘Well, yeah, we were 13-4, 12-5 or 17-0′ or whatever it is if you don’t do anything in the postseason, then you’re really at the end of the day no different than the Jacksonville Jaguars or the New York Jets that didn’t get in,” Aikman said during a recent appearance on the Musers on 96.7 FM/1310 AM The Ticket.

“And I think losing — and I’m not trying to suggest that every team that doesn’t win the Super Bowl may as well have not played the year. I’m not saying that because I know in ‘91 when we made it to the postseason finally after having not been in the postseason for so long, that was a big accomplishment and we were able to win a playoff game. But then we hit a period where, hey, if you don’t win the Super Bowl, it’s a disappointment. In 1994 when we lost to San Francisco in the championship game, that was a disappointing year. There was no part of any of us that walked away from that year saying, ‘Yeah, this was a really successful season.’”

Despite the relatively embarrassingly loss, it appears that head coach Mike McCarthy will be returning next season, as both he and Cowboys EVP Stephen Jones seems confident in his return.

Unfortunately for the Cowboys, their 2021-22 postseason run came to an end following their Wild Card Weekend defeat to the San Francisco 49ers. Thanks to their upset over the ‘Boys, San Fran will now head up to Wisconsin to face off against NFL MVP Aaron Rodgers and the top-seeded Green Bay Packers for a Divisional Round matchup on Saturday night. On the other side of the NFC Playoffs bracket, Tom Brady and the defending Super Bowl champions Tampa Bay Buccaneers will host the Matt Stafford and the 4-seed Los Angeles Rams.

Over in the AFC, the top-seeded Tennessee Titans will be hosting the Cincinnati Bengals, while the Buffalo Bills will be heading down to Kansas City for a rematch of last season’s AFC Championship game with the Chiefs.