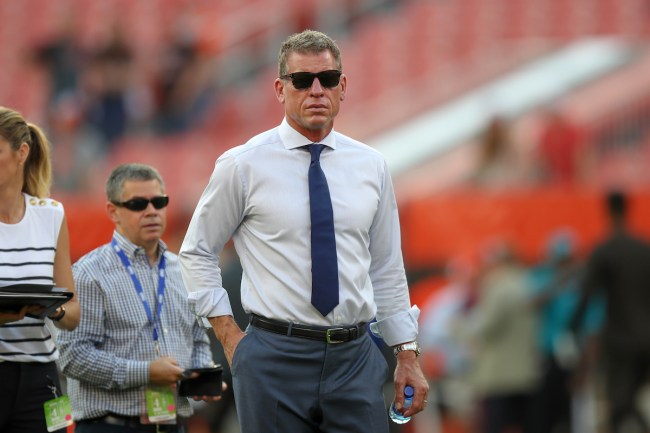 When the pandemic first hit in March 2020 and the world shut down, everyone had one of two choices – get in insane shape with all the free time or get fat as hell.

Former Dallas Cowboys quarterback and current Fox football analyst Troy Aikman choose to get into “the best shape of his life.” Aikman spoke with GQ about his decision in a new interview.

“When you say you’re in the best shape of your life, usually what that means is that you’re old,” the 54-year-old Aikman told the magazine. “You don’t hear 20-year-olds saying, ‘I’m in the best shape of my life!’ But I feel really good. I think it’s as healthy as I’ve ever been, physically, mentally and emotionally.”

Reflecting on his 12-year NFL career, the Hall of Famer admits he really only has one regret, and it doesn’t involve anything that happened on the field.

Aikman’s one regret involved his training regime and the way he punished his body.

“We’d be in training camp, in two-a-days, and the morning practices would end. And these weren’t walkthroughs like they are today. I mean, they were real practices. So there were a lot of calories expended. And I would go run four miles in between practices and come back and practice that afternoon.

I was 27, 28 years old, but I did that throughout the rest of my career. I was way over training and I just didn’t have any legs by the end of my career. At the time, I’m thinking, all this extra work that I’m putting in is really good for me.

In hindsight, it was probably detrimental. I just got obsessed with it. That’s the thing I would eliminate that if I had to do it over again.”

Aikman also wishes he had nutritionists and trainers during his playing career the way players like Patrick Mahomes and Tom Brady do today. Aikman feels like paying extra special attention to those details will mean longer careers for players now.

My guess is that Mahomes and Josh Allen have nutritionists. They come into the league now, almost a corporation of their own where they just have a whole team of people that help them take care of themselves. It’s a really positive thing.

Tom Brady playing at 43 is amazing, but I think we’re going to see a lot of quarterbacks playing until they’re 41, 42, 43 years old in the future.

Aikman won three Super Bowls with the Cowboys, made six Pro Bowl teams, and was the Super Bowl XXVII MVP. He shouldn’t beat himself up too much about regrets.