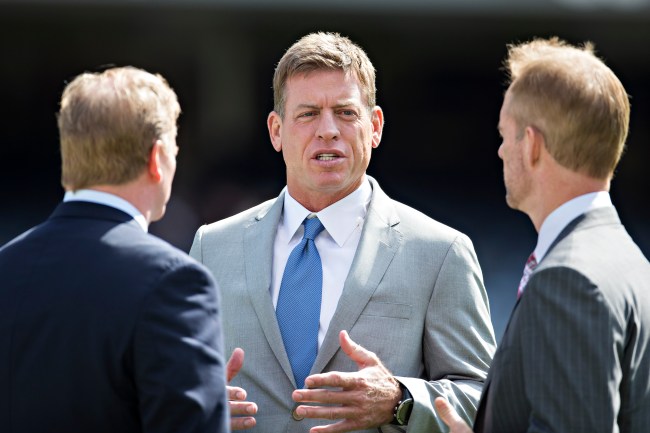 Troy Aikman’s a Pro Football Hall of Famer and a three-time Super Bowl-winning quarterback, so it’s hard to argue with some of the things he has to say about the game of football. As a commentator for FOX Sports, Aikman is a solid color guy alongside Joe Buck in the booth, offering up some analysis that only a former player can give.

Unfortunately, just because he has plenty of credentials doesn’t mean that everything Troy Aikman says is legit — which is the case with many people with any success in something. An expert isn’t made just because of personal accomplishments, and, thanks to social media, we’re definitely reminded of that.

For instance, just look at what happened following the Kansas City Chiefs‘ victory in Super Bowl 54, which was quarterback Patrick Mahomes‘ first NFL title. With the superstar quarterback just 24 years old, the sky’s the limit in terms of how many times he hoists the Lombardi Trophy in his career. Could he surpass Aikman’s three titles? Quite possibly. And, after an old tweet from Aikman resurfaced after the most recent Super Bowl, the former Cowboys star is getting drilled by people on Twitter.

Back in September, a stat was tweeted out about Mahomes throwing 36 percent of Troy Aikman’s career touchdowns in about 8 percent of the games. Naturally, the current FOX Sports broadcaster didn’t take the stat kindly, tweeting out the below reply to try and defend himself.

iCYMI: Talk to me when when he has 33% of my Super Bowl Titles https://t.co/Ba8kjPRnDs

Well, fast-forward to present time and, boom, now Mahomes has one-third of the titles Aikman finished with — which Twitter absolutely pointed out. Just take a look at some of the replies below after Troy’s old tweet was brought back up.

ICYMI: Mahomes now has 33% of Aikman's Super Bowl Titles in just 16.7% of the Seasons played by Troy. https://t.co/PtyXRQM3es

I am here to talk. https://t.co/kSsbkUnQ8I

Does he have your number? #SBLIV https://t.co/6GDSEHsB6C

ICYMI: Mahomes now has 33% of Aikman's Super Bowl Titles in just 16.7% of the Seasons played by Troy. https://t.co/PtyXRQM3es

Are you ready to talk yet? https://t.co/CK1yjGyRVq

The Internet always wins, guys, and Troy Aikman needs to remember that the next time he takes to Twitter as he did a few months ago. Remember when Herm Edwards would always tell players to think before “hitting Send” on their phones to make a thought public? Yeah, that’s something the Hall of Famer should probably think about anytime current stars get compared to him — because they can still add to their playing resumes, he can’t.

Oh, well, just chalk this up as a big L, Troy, and go get ’em again next season.