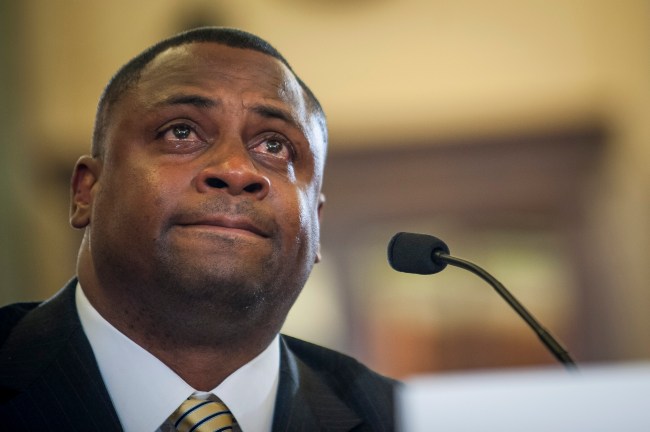 Troy Vincent, the NFL’s Executive Vice President of football operations, was one of the toughest players in the league during his 16-year career with teams like the Miami Dolphins, Philadelphia Eagles and Buffalo Bills. But he got (rightfully) emotional during a recent appearance with ESPN Radio’s Keyshawn, JWill & Zubin when discussing his reaction to the protests going on around pro sports over the Black Lives Matter movement.

When asked by another one of his former NFL counterparts, Keyshawn Johnson, Troy Vincent didn’t mince words, and delivered a powerful statement about what life’s like for he and his three sons in America right now. Take a look below.

"This shit has got to end."

“This shit is — it’s gotta end,” Vincent said. “I’m so proud of these young boys. These young men and women. They did things I didn’t think about doing. I always walked for the community but during my time we thought we had a handle on it and obviously we didn’t.”

“[W]hen I saw Doc Rivers and Lebron [James] and George Hill, I think about my three boys and I’m sitting up here every day having about contact tracing and how we’re gonna play ball, and I got a 22-year-old and 20-year-old and a 15-year-old that I’m trying to prevent from being hunted,” Vincent said.

I don’t care what side of the political spectrum you’re on, or what you believe in, what Troy Vincent said strikes a nerve for anybody who has a pulse. Those tears are real. That fear and emotion in his voice isn’t staged. The raw statement is something that should give everybody an idea with how different things are for groups of people in the country right now.

Vincent used the words “getting hunted” when describing his duty as a dad from protecting his three sons anytime they leave the house. That’s heartbreaking, and something that we often don’t see from those in leadership positions very often — especially in a league like the NFL.

As a former player, it’s wild to hear Troy Vincent compare his own situation to what pro athletes are doing these days to force change. With a wider platform thanks to social media and news coverage in general, the current NFL executive mentioned how his generation barely scratched the surface on issues like this — and it’s clear by his interview with ESPN Radio that he’s proud of how far things have come in terms of athletes speaking up.