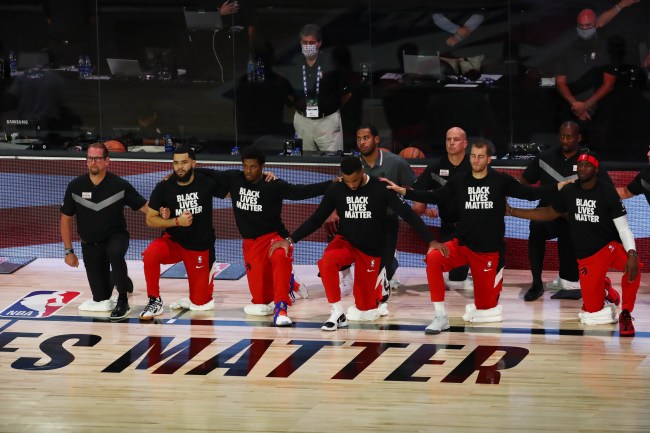 The police shooting of Jacob Blake in Kenosha, Wisconsin has rattled a number of NBA players who are considering leaving the bubble and going home according to various reports.

According to Yahoo Sports NBA writer Chris Haynes, several players met on Tuesday night to discuss what actions they can take to shed light on police brutality following the Blake shooting.

An assembly, organized by players who are emotionally traumatized by the latest police-involved shooting of an African American that was captured on video, was held Tuesday night at Disney’s Coronado Springs Resort, sources said, and there were multiple conversations about what actions could be taken throughout the day.

There is an ongoing dialogue on what more could be done inside the bubble to raise awareness to racial injustice in an effort to enact change and thwart police brutality toward people of color, sources said.

The hearts of players are heavy, with some feeling intense guilt for playing and that they’re providing entertainment that is drowning out the injustices that are plaguing this country, sources said.

On Wednesday, Raptors head coach Nick Nurse revealed that several of his players have discussed going home before the start of their second-round playoff series against the Celtics to boycott police brutality.

Nick Nurse: "The players are deeply disappointed… They want to be part of a solution. They want to help. They want justice. They want this particular problem to be handled in a better way. Boycotting the game has come up as a way to demand more action."

Nick Nurse: "Boycotting the game has come up for them as a way to again try to demand a little more action. And I think that's really what they want. I think there's enough attention and there's not quite enough action, and I think that's what I can sense from the discussion."

Update: Raptors forward Pascal Siakam shed light on his feelings on the matter.

Pascal Siakam: "We came here for a reason, to use our platform and wanting to send a massage and hopefully bring awareness and [make] a change. But if feels like we’re stuck. We’re not doing anything productive … it hurts."

"It feels like we're not doing anything productive." Pascal Siakam on being in the bubble right now during this time.