The Cowboys Made Their Second-Round Pick, Trysten Hill, Sign A ‘Work Ethic’ Contract After Drafting Him 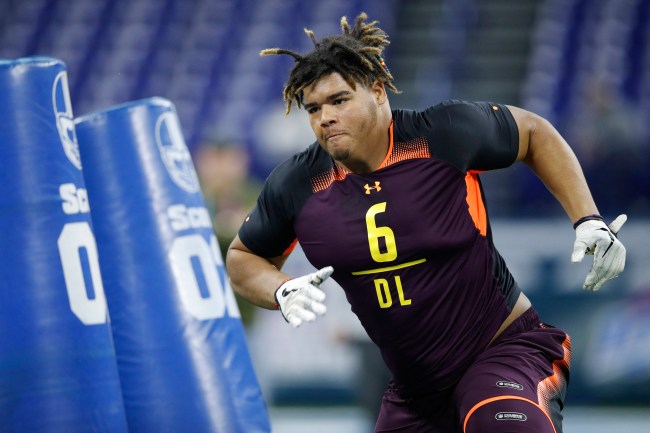 Trysten Hill was taken in the second round of this year’s NFL Draft by the Dallas Cowboys, 58th overall, which means he’s probably pretty damn good at football, right? Sure, like every single prospect, the defensive lineman from Central Florida had some question marks about his game, but, overall, the dude seems like a solid choice to bolster Dallas’ defense this year and beyond.

However, some of the questions surrounding Trysten Hill ended up being a bit bigger red flags than some teams may have wanted to deal with. That’s because, during his final year with the Golden Knights, the kid had a few public spats with his coaches, not only playing very little in the team’s Fiesta Bowl loss to LSU — Hill’s final college game — but then calling out his coaches for the lack of playing time. Not really the most brilliant idea leading up to the NFL Draft, but it didn’t seem to hurt the D-lineman’s draft stock too much.

Still, because of his recent history with some of his coaches as he left Central Florida, the Cowboys made Trysten Hill sign a “work ethic” contract after selecting him in the NFL Draft, which seems a little bit odd, but, hey, apparently it’s to keep him focused on football and is something that the team’s defensive coordinator, Rod Marinelli, has done for years internally.

Per a report from the Dallas Star-Telegram‘s Clarence Hill about Hill’s work ethic deal, here’s what Marinelli had to say.

“I do this with every guy from a free agent to a draft pick, just my own copy of it, back and forth, front and back,” Marinelli said, via Clarence Hill of the Star-Telegram . “It talks about how we play, what I ask of you in practice, day of games, all of it. I am very clear of it.

“I said to him, ‘If it doesn’t fit you, tell me now, because you will not be happy here. I told him to keep it, and he said, ‘Coach I feel great about this.’ It’s just about how you play. It’s a lot of different things, but how you carry yourself, how you play in our system. The effort and the want to, every snap. We’re unique that way — how hard we practice and play. I usually see that on film early with guys. He really plays hard. If you watch his tape, he really hustles. That’s the passion we want in these guys.”

While the whole work ethic contract is more a handshake deal than something that’s legally bound, it does seem as if Trysten Hill will honor it, as he sounds as if he admires Marinelli and knows the coach has the best interest for the player.

“I can’t put into words how important our relationship is with each other,” Hill said, via the Star-Telegram. “He wants the best out of me and I want to give him everything I’ve got. Him really taking hold of me this whole process, and me being able to call him and chat with him and hear his voice was huge in this whole ordeal.”

This is a pretty unique for the Cowboys to try and motivate their young players as they enter the NFL, so we’ll have to see if it ends up working in Trysten Hill’s case.