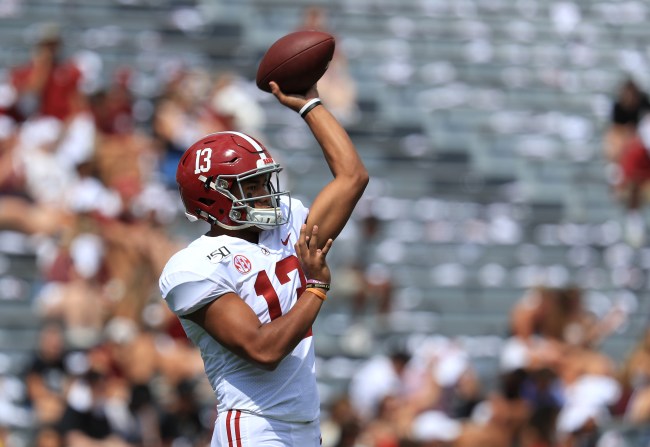 Tua Tagovailoa has been one of the favorites to win the Heisman Trophy ever since he took over the full-time starter’s role at quarterback for the Alabama Crimson Tide. The lefty, who flashed brilliance in the 2017 College Football Playoff National Championship, replaced Jalen Hurts in that game against Georgia, led an epic comeback, and, ultimately, won the national title for the Tide — and he hasn’t looked back since.

In his first full season under center for Bama, Tua Tagovailoa lit up defenses, passing for 3,966 yards and totaling 48 touchdowns, which, when looking back now, may have been too much, as his team was so good that Tua actually sat during a lot of 4th quarters during blowout victories. That move may have cost him the Heisman last season, but he’s locked in and challenging to win it this year.

Clearly, Tua’s as talented as they come. So, while he wasn’t getting his opportunity during that 2017 regular season — forced to backup Hurts at the time before being thrusted into the spotlight during the National Title Game — Tagovailoa did what most players do; he thought about bolting Tuscaloosa for (possible) greener pastures, with the quarterback admitting that he was “really close” to transferring to the USC Trojans since he wasn’t getting a chance to play.

Appearing as a guest on the Dan Patrick Radio Show recently, here’s how Tua Tagovailoa explained the situation to the host — with the focus on playing closer to his family and his native Hawaii.

“(A transfer to USC) was really close I think,” Tagovailoa. “I wanted my parents to see me play. My parents wanted to see my play. Just doing things for my parents, making them happy and proud, are the two biggest things I wanted to do, and I couldn’t do it from the sidelines.”

What might have been, right? Not only would Bama had, presumably, stuck with Hurts as their starting quarterback, but the Trojans would have, arguably, the best passer in college football right now in Tua — which, given the injuries piling up to their starter and backup, would be welcome right now.

As the story goes, though, Tua Tagovailoa ended up winning the Bama starting gig, Jalen Hurts transferred to the Oklahoma Sooners — where he’s tearing it up — and both programs look ecstatic with their quarterback play. Whether it was Hurts or Tua who was going to transfer, the landscape of college football was changed; and it’s interesting to see how close Tagovailoa, not Hurts, was to leaving Alabama.