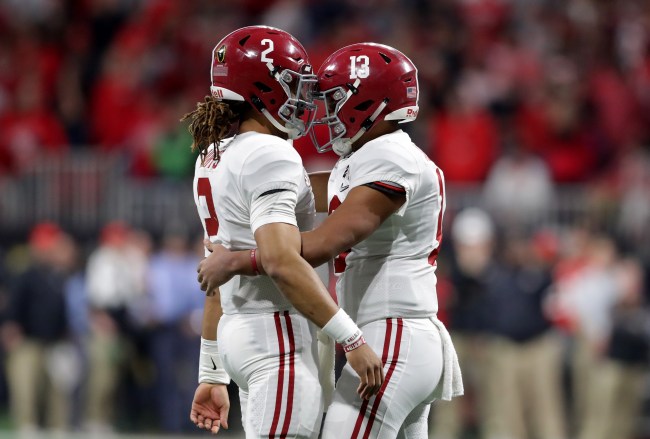 We’ll never understand the mix of emotions Alabama QB Jalen Hurts was feeling after his Crimson Tide came back to win the BCS National Championship. Hurts, who was benched for 19-year-old freshman quarterback Tuanigamanuolepola “Tua” Tagovailoa (my God) after halftime, had thrown for just 21 yards in a scoreless first half for the Crimson Tide.

Tua entered the game and threw for 166 yards and three touchdowns in the win, including a 41-yard beauty to DeVonta Smith to seal the game in overtime. Despite being held out of the game after leading his team to the National Championship, Hurts could be seen smiling and cheering on his replacement. He was the first player off the bench to congratulate Tua after throwing his first touchdown pass. After the game, the sophomore could not have been more gracious in his response to Tua’s success:

“He was gonna step in and do his thing. We have a lot of guys in the QB room that play really well, and he stepped in and did his thing. Did his thing for the team.”

Well, as you can imagine, the talking heads have come out in droves, claiming Hurts choked and projecting that he will transfer schools or switch positions this offseason. Former Alabama quarterback Greg McElroy has already predicted Hurts could transfer to Texas.

In any event, last night Tua tweeted his support of his teammate and recognized how much of the credit is due to Jalen.

Tired of people not appreciating the fact that if this man led us to the National Championship. And for all the fans that are against Jalen, you against me too. You either WITH US or AGAINST US. Love you 2 🐐#BigBroLittleBro @JalenHurts pic.twitter.com/ExjHAB7yHh

Hurts hasn’t tweeted since April, but hopped on Twitter to thank the unlikely hero.

💯🙏🏽Love You Too Lil Bro ! Proud Of You! #NationalChampions https://t.co/4sqdWVxlAJ

This makes me feel good. Sports can be awesome.

P.S. I was at the game. Here is me absolutely annihilated calling the game-winning touchdown.