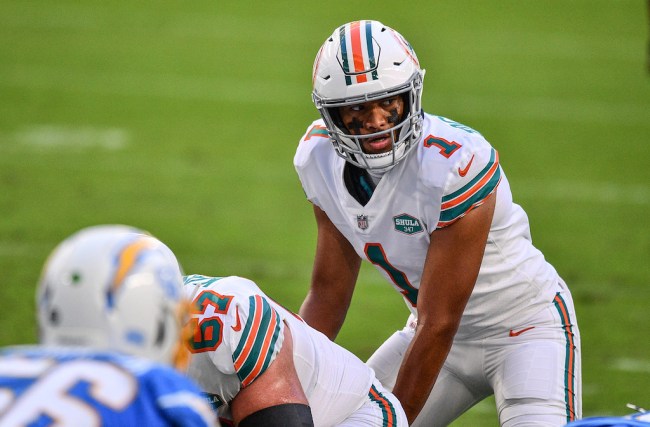 Remember when Tua Tagovailoa was the quarterback everybody wanted? Where teams like the Miami Dolphins would actually tank for the former Alabama signal-caller? When the lefty was a lock to go No. 1 overall in the 2020 NFL Draft? Yeah, it wasn’t that long ago, considering the kid’s still in his rookie campaign and has only played in five games in his career so far.

But a funny thing happened between Tua’s devastating hip injury last season while at Bama to now: He wasn’t at the top of his draft class at his own position, with the Cincinnati Bengals choosing Joe Burrow No. 1 overall, and Justin Herbert of the Los Angeles Chargers getting much more fanfare for his performances thus far this season. Even so, Tagovailoa has proven to be a good pick, injecting energy into the Dolphins and playing pretty good football to this point.

After laying a dud in his Week 11 matchup against Herbert and the Chargers though — one in which Tua was actually benched for playing so poorly — the sports media hounds were out for blood Monday morning, already criticizing the Dolphins for selecting the former Bama quarterback over the former Oregon standout. Just look at what ESPN’s Mike Greenberg said on Get Up, with many of his colleagues expressing a similar take.

Now I understand how the sports media world works, where overreactions on TV happen every single day in order for sites like BroBible and writer’s like me to talk about. But, c’mon, this is sloppy by Greenberg and his ESPN colleague. While Justin Herbert has been lighting up the league since taking over the starting gig for the Chargers, let’s not forget what ESPN’s own draft analysts said about the kid leading up to the NFL Draft.

Todd McShay: “I’ve heard some whispers, but not from anyone within the Miami organization, about Justin Herbert. I’ve heard some of those rumors. I think Jordan Love is a better player. He’s going to be a better player if developed properly. That’s the interesting part. You get the Chargers sitting right behind them.”

And, while there was plenty of concern about Tua’s hip and his recovery leading up to the draft, for comparison’s sake, here’s what the same analysts had to say about him before the draft earlier this year.

Mel Kiper: “Tagovailoa is just too gifted. You’re talking about the best pure passer in this class. Could he drop to the middle of the first round because of the injury? Yes. But he’s going to go earlier than most people think. And some team is going to find its quarterback of the future.”

Sure, Herbert might be putting up video game-like stats and is showing he may be the more electrifying player right now after winning a head-to-head competition with Tagovailoa, but he went to a team with more established offensive weapons. He’s also just 2-7 in his starts, whereas Tua lost for the first time as a starter Sunday, and is 3-1 overall in his starts. So, you know, that’s kind of important.

Are the Dolphins having buyers remorse after choosing Tua Tagovailoa over Justin Herbert in the NFL Draft? I doubt it. Plenty of people on Twitter tend to agree with me, based off some of the reactions to Greenberg’s take Monday morning.

Give Tua Mike Williams, Allen and watch him flourish

Stop looking at just stats and factor in who has the better WR’s. It’s obvious who it is.

Lol. This is such a caught in the moment take. So he is doing great and has a great offense. Okay.

In 5 years if he is doing great still…then you can make this claim.

It’s easy to say Miami should’ve picked Herbert over Tua now, but back in April when the NFL Draft was going on, there were so many question marks about the former Oregon product that didn’t have answers. These guys are halfway through their first season in the NFL, so let’s just pump the brakes and see how the next couple years play out before declaring if the Dolphins made a mistake choosing Tagovailoa or not.