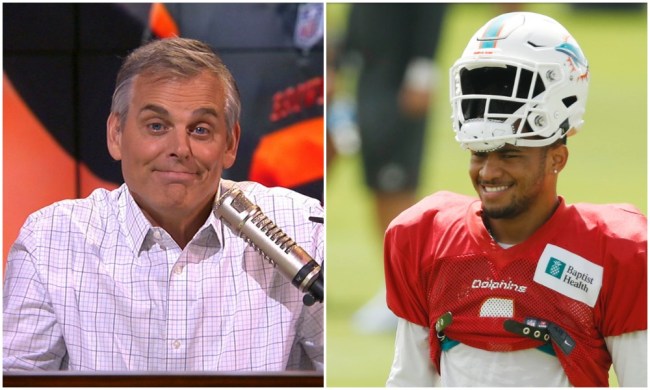 Tua Tagovailoa will make his first start in the NFL on Sunday when the Dolphins take on the Rams in Miami. With his first start only a few days away, it’s officially Tua prediction time in the sports media world and Colin Cowherd made his on ‘The Herd’ on Thursday afternoon.

Cowherd’s prediction? Tua won’t work in the NFL, that’s the “epiphany” he said he had on Wednesday night thinking about the young quarterback.

Cowherd has every right to go ahead and essentially call Tua a bust, he’s paid a lot of money to make hot takes like this, but the reason he gave as to why he doesn’t think Tagovailoa will work in the NFL are a bit flawed.

Tagovailoa is only 6-feet tall and according to Cowherd a quarterback has to at the very least be 6-foot-2 to be successful in the NFL.

Comparing Tua, who has made just two throws in an NFL uniform at this point, to the “best quarterbacks of all time” seems like a bit much. ‘All time’ is a long time, and the game is much different today than it was 40 years ago.

There are three undersized quarterbacks in the NFL right now that are playing at a pretty high level and those are Russell Wilson, Kyler Murray, and Drew Brees. Cowherd thinks that since Tua isn’t as fast as Wilson, Murray, or the legend Frank Tarkenton then he may struggle in the league.

“Three small quarterbacks [Wilson, Murray and Fran Tarkenton] have worked, and they’re all run around guys,” Cowherd continued. “You can’t catch Kyler. Fran Tarkenton ran circles around people for 10 years. I watched. And then Russell does it, and Kyler does it and Michael Vick did it. Tua is small and isn’t really that athletic.”

When it comes to Brees, who falls into that ‘not really that athletic’ group, Cowherd believes that Tua will have to be the next Brees in order to not be a bust in the NFL.

These are far from the hottest takes Cowherd has ever thrown out there, and they very well all could come true. But, comparing Tua to some of the best to ever do it and somehow thinking that he won’t be as good as the all-time greats means he “won’t work in the NFL” is a bit much.

.@ColinCowherd had an epiphany last night. Tua is not going to work in the NFL: pic.twitter.com/aFaNGre72y