Colin Cowherd Makes Fun Of Carson Wentz For Wearing His Hat Backward, Thinks It Hurts Him As A Franchise QB 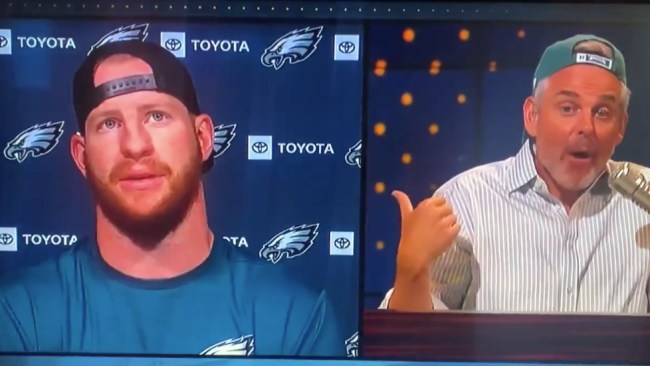 Carson Wentz is no stranger to being dragged by the media and with the Eagles off to an 0-2 start this season the Philadelphia quarterback is hearing it from just about everyone.

While most media members and even fans are criticizing Wentz for his below 60% completion percentage and the fact he’s thrown just two touchdowns and four interceptions, Colin Cowherd decided to get onto him about the way he wears his hat.

Wentz is a big backward hat guy, Cowherd is not.

During his show on Thursday, Cowherd legitimately got onto and made fun of Wentz for the way he wears his hat. He even implied that it hurts his image as a franchise quarterback. Let me repeat that, Colin Cowherd thinks the way a quarterback wears his hat has some sort of effect on his image and even game.

Also, based on the video below, any dude that wears his hat backward doesn’t know how to talk properly and turns into a Northeast version of Adam Sandler in ‘The Waterboy.’

Colin Cowherd Gets On Philadelphia Eagles Quarterback Carson Wentz For Wear His Hat Backwards As A Franchise QB. Do he have a point? pic.twitter.com/t43xoRlUQ4

It was a relatively slow news day in the sports world on Thursday, but it wasn’t that slow, Cowherd.