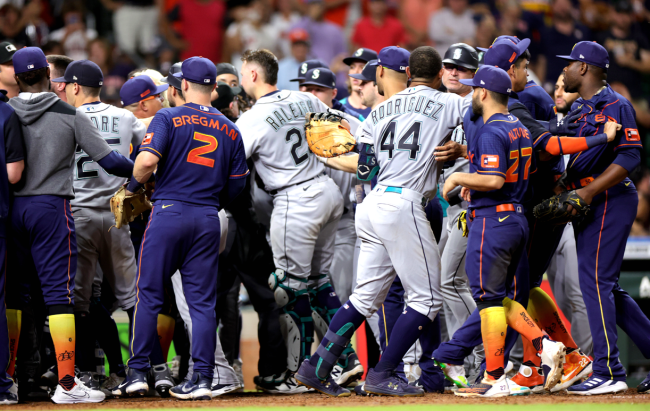 The Seattle Mariners beat the Houston Astros 7 to 4 on Monday night with Cal Raleigh driving in four runs and Julio Rodriguez adding another two on a home run in the ninth.

That big hit by the 21-year-old rookie, however, was overshadowed by something else that happened in the ninth inning.

Just prior to Rodriguez’s bomb, his teammate Ty France took a 94 mph fastball to the keister from Astros reliever Héctor Neris which led to tempers flaring and both benches emptying out on to the field.

After the game, France explained what happened from his perspective.

Yes, yes they were.

Benches clear in the Mariners-Astros game after Ty France was hit by a pitch pic.twitter.com/8IlcNrQCh6

Astros manager Dusty Baker wasn’t too happy after the game either, especially since he and Neris (who threw another pitch behind Eugenio Suárez later in the inning) were ejected from the game.

“I don’t want to talk about it too much more because I’m already kind of pissed off,” Baker said, adding. “In a one-run game, you’re not going to put anybody on by throwing at them. We don’t do that anyway.”

Neris, when asked if he was trying to intentionally hit France, said, “I don’t have a comment about that.”

Mariners manager Scott Servais obviously believed that it was.

“He threw behind Ty France; it is pretty clear,” Servais said after the game. “Coming into the series, whatever happened to them yesterday (Astros reliever Ryan Pressly was ejected in the ninth inning against the Royals), we were not involved in that. I thought it was clear he threw the ball behind him. The guy walked three or four guys all year.”

Rodriguez, who has trained the past few offseasons with Héctor Neris and held him back during the fracas, said after his home run, “I definitely was fired up. I never really talk or yell during my homers, but given the situation, I felt like I needed to and I kind of let all my emotions go out.”

Baseball fans, while torn on whether or not the pitch was intentional, certainly enjoyed the drama.

The next batter holds back the pitcher from getting involved. Makes sure he does not get ejected, then takes him deep.

Not intentional? Look granny, 2 outs, nobody on, right towards the middle of the back of a top 3 1B in baseball… if you know nothing it’s ok to be quiet, and if somehow he missed that bad, twice, he shouldn’t be on a big league team

I could take the entire Astros lineup