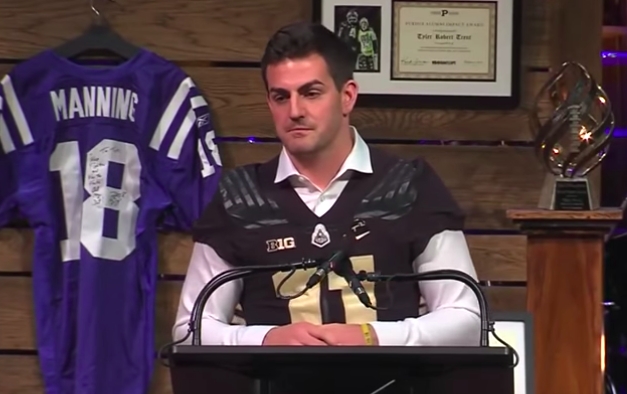 Back in October, I learned about the story of Tyler Trent, a Purdue student and superfan who was forced to withdraw from the school due to his battle with terminal bone cancer.

The sporting world was quick to rally around the 20-year-old, who continued to attend Boilermakers football games while undergoing treatment and eventually became an honorary member of the team.

Trent’s diagnosis was a grim one but he took full advantage of his remaining time on Earth until he succumbed to the disease at the start of the new year.

It’s with the deepest sorrow that we have to say goodbye to @theTylerTrent. We have all become #TylerStrong. To his family, words can’t express how sorry we are that he has passed. His life May have been short, but his legacy with be forever. pic.twitter.com/rONp00YoeK

His story touched countless people— including Purdue quarterback David Blough, who was asked to take a few minutes to reflect on his relationship with Trent at a memorial service for the superfan earlier this week.

Before you click play, I should let you know this video might make you feel emotions you’re not ready to feel. Don’t say I didn’t warn you.

Blough and some of his teammates spent two days with Trent at the College Football Awards show in December and the quarterback said it “was easily the best 48 hours of my life.”

He got a bit choked up as he reflected on how Trent relied on his religious faith during his battle with cancer to keep his spirits high and said that it had a big impact on his own personal beliefs.

He referenced an oft-quoted Bible verse Trent sent him multiple times over the course of their all-too-brief friendship, which he repeatedly turned to while fighting his illness:

“[He was] walking through the valley of the shadow of death, staring it right in the face, and because of his hope and trust in Jesus Christ he didn’t lose hope.

He was able to see the circumstances in front of him as an opportunity to serve others.”

There must be something in my eyes because that’s the only way to explain why they’re watering.