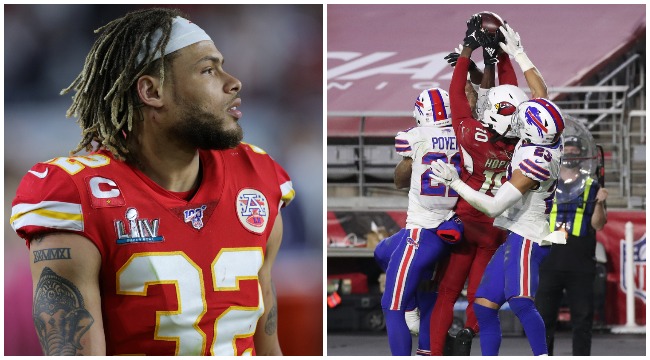 On the very same day, the Texans traded DeAndre Hopkins to the Cardinals for oft-injured RB David Johnson, a second-round pick, a 2021 fourth-round pick, a sack of marbles, a few baseball cards, and a dead parakeet.

The Hopkins trade was so preposterous that many have pinned it on the Mount Rushmore of Worst Trades Ever. It could not even be processed by a computer.

The trade decision was brought back for its second round of public flogging after DeAndre Hopkins made a superhuman, game-winning catch against the Bills on Sunday.

This is why you trade for DeAndre Hopkins

(and why you don't trade him away 🙃) pic.twitter.com/cesPQe27PO

Kansas City Chiefs safety Tyrann Mathieu is no stranger to the dysfunction in Houston, playing for Bill O’Brien’s Texans in 2018 before realizing he was on the Titanic.

Following Hopkins’ alien catch, the Honey Badger decided to revel in the misery of the Texans from the comfort of his life boat.

He had to not be a cultural fit.

Context: Last week, the Texans fired vice president of communications Amy Palcic, a Rozelle Award-winner (best PR staff) and the first and only woman to have full PR responsibilities for an NFL team. The NFL community roundly lambasted this decision.

Tyrann tosses haymakers on this website at times and I'm absolutely here for it. https://t.co/auLZ8nU4Rz

The heat radiating from this tweet could power the nation https://t.co/PMcNJfi7i0

The Texans are 2-7 at the time of this writing.