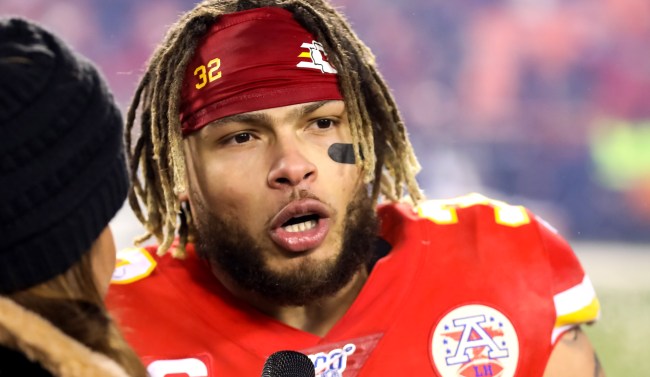 Late in the Kansas City Chiefs comeback blowout of the Houston Texans on Sunday, defensive back Tyrann Mathieu had a chance to sack Deshaun Watson with a very hard hit. Instead, he pulled up and barely touched the QB.

Much like when a baseball player bunts when his team is being no-hit, a handful of “purists” came out of the woodwork to complain that Mathieu wasn’t “paying the game the right way.”

Strange seeing blitzing DB let up. This used to be an ear-holing. Good for QB health. pic.twitter.com/a0oAIv1pFM

the game is soft now old football was way better

Most (normal) people didn’t have a problem with it, but because this is the world we live in now, Mathieu felt the need to defend himself for not taking Watson’s head off with the win already in hand.

“The game was over. Yeah that’s my boy , but I’m not fake tough, I don’t have to hit you to make me feel like imma big beast. This is football, but every act isn’t violent,” he tweeted in response. “Maybe I’m built different.”

The game was over. Yeah that’s my boy , but I’m not fake tough, I don’t have to hit you to make me feel like imma big beast. This is football, but every act isn’t violent. https://t.co/KmNl7zDEhF

Not that his message didn’t go completely ignored by the “purists.” Because of course it did.

You gotta play 100% on EVERY play...you could’ve just wrapped him up or prevented him from actually throwing the ball...if the Texans are worried about DWatson’s health they should’ve just run the ball or put the backup in

I prefer the Ronnie Lott era when real men played football. Nobody went into the little blue tent for a bump on the head.

Not gone lie. I would have blasted him. Make a statement. I don’t give a damn if you my friend.

Man, those guys better not read these tweets then. They’ll have a stroke.