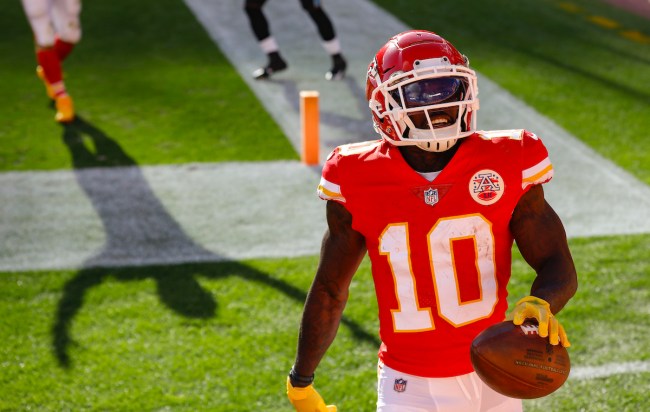 Kansas City Chiefs wide receiver Tyreek Hill might just be the fastest man in the NFL, with the Pro Bowler showcasing his blazing speed pretty much anytime he steps on the football field. Look no further than his game against the Tampa Bay Buccaneers in Week 12 as evidence, as the dude destroyed the Bucs’ secondary on his way to a 13-catch, 269-yard performance, with touchdowns of 75, 44 and 20 yards.

Tyreek Hill in the first quarter:

With those kind of wheels, a man must be stupid, crazy or a little bit of both to dare challenge Tyreek Hill to a race. But that’s what ESPN reporter Adam Schefter wants to do after the COVID pandemic ends, tweeting a response to Hill about going head-to-head in a good-natured, 100-yard dash.

Now, common sense tells us that Schefter has absolutely zero chance of beating Hill in a race if all things are equal. Knowing that, Tyreek went on ESPN’s Get Up Tuesday morning to offer up some rules for the expected showdown — and, as you might guess, they heavily favor Schefty. So much so that they’re straight up disrespectful, with Hill saying he’d give the reporter a 40-yard head start and wear full pads for the race.

RT if you think this offer is fair and Schefter should accept this challenge 🤝 pic.twitter.com/1EArXYsTo0

That’s some serious big dick energy from Tyreek Hill, man. Imagine having the confidence to give another grown man a lead of nearly half of a football field in a 100-yard race, and, without concern, pretty much declare you’ll win. When pressed to stretch Schefter’s head start to 50 yards, Hill balked a bit, but he didn’t completely rule out the possibility.

This is an awesome idea, and should be pretty entertaining. Sure, Schefter stands no chance of beating Hill — even with a 40-yard head start — so imagine how amazing it’ll be to see the Chiefs wideout come from behind and absolutely destroy the reporter. It’ll really put his speed on display.

As for you gamblers out there who actually think Schefty would stand a chance, I’ll just remind you that Hill runs a 4.29 40-yard dash, while the ESPN reporter clocked in at 5.02 while wearing slacks and dress shoes a couple of years ago. Here’s your reminder of how that went.

A 5.02 40-yard dash in dress shirt, slacks and @colehaan shoes. Might have been slightly wind-aided but at least it wasn’t first-aided. pic.twitter.com/2K36aSZuBA

Uh, yeah, even if Adam Schefter did nothing but train for the next six months for this race against Hill, he’s still going to lose by a good 5-10 yards. You can’t teach speed, guys, at Tyreek Hill as plenty of it to absolutely embarrass people.