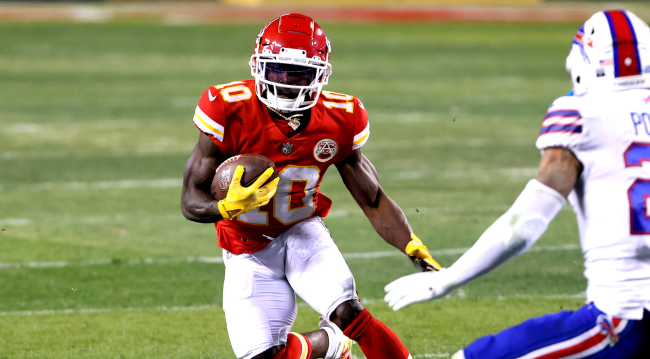 Would he be correct?

At 5-foot-10 and 185 pounds of muscle with more speed than a cheetah, Hill isn’t crazy for thinking that he could beat a Ninja Warrior obstacle course.

In the video below, filmed at Ninja Quest Fitness in Marietta, Georgia, the 27-year-old Pro Bowler does make easy work of some swings between a set of monkey bars – something he says is like “level one of Mario.”

After that, Hill tries his hand at the infamous American Ninja Warrior Warped Wall and scales it like it’s no big thing.

His next challenge is traversing a swaying inverted ladder, which he coasts right through with very little effort.

Hill then slays something called the Devil Steps, blows through the Jumping Spiders, but appears to begin tiring a little doing the Rumbling Dice.

After some Quintuple Steps, a little parkour, a walk across a rocking pipe, Hill finally meets his match at the Cliffhanger.

“What kind of human doing that?” Hill asks in disbelief after failing to make it across.

So was Hill right? Does he have the perfect build to compete in American Ninja Warrior? Maybe, but even though he is a good enough wide receiver to catch 15 touchdowns in the NFL last season, it would appear that if he did compete even he would have to work on his hand strength a little bit. Go figure.