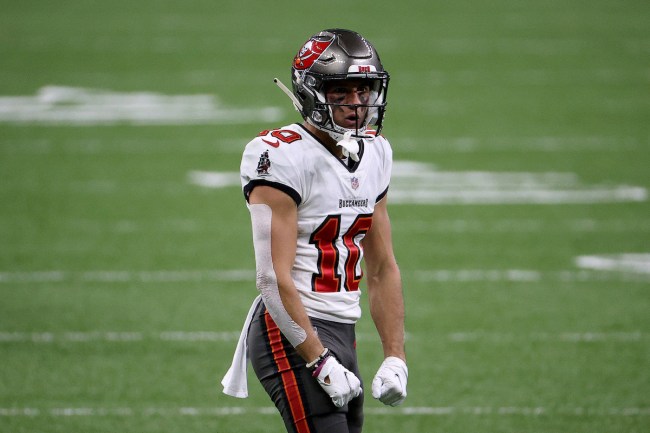 When the Tampa Bay Buccaneers selected wideout Scotty Miller in the sixth round of the 2019 NFL Draft, I bet they had no idea that the dude would come in with such swagger. Sure, the pint-sized receiver may only be listed at 5’9″, 175 — which is about the size of a normal, average Joe — but he plays with the heart the size of Rudy.

Miller also happens to be pretty damn talented, as the slot receiver proved this NFL season when Tom Brady was passing him the ball. During the regular season, the wideout caught 33 balls for 501 yards and three touchdowns, proving that he sure as hell belongs on the field as much as possible to provide an X-factor for the Bucs’ offense.

Now that he’s seen some success — or now that people actually know who the hell he is — Scotty Miller’s making big claims leading up to Super Bowl 55, with the Bucs player telling Dan Patrick Wednesday morning that he’s faster than Chiefs speedster Tyreek Hill, which is something guys like Terrell Owens have once claimed as well. Take a look below at Miller’s claim.

Asked by Dan Patrick to compare himself to Chiefs wide receiver Tyreek Hill, Miller said he believes he would win a one-on-one footrace.

“I’m taking me, every day of the week,” Miller said. “I’ll take me over anybody. Tyreek is unbelievable, super quick, unbelievable talent. But if we’re talking about a race, I’ve got all the confidence in myself going up against anybody.”

Asked if he considers himself the fastest player in the NFL, Miller said, “Yes, sir.”

I have no idea what kind of confidence juice Scotty Miller’s sipping this morning, but, sheesh, everybody should get themselves some of it because this is next level stuff. Tyreek Hill’s presumed to be the fastest man in the NFL, with the Chiefs wideout looking like a flash when he’s out on the field. Hill even said earlier in the season that he could beat ESPN reporter Adam Schefter in a 100-yard dash after giving Schefty a 40-yard head start.

As for actual 40-yard-dash times between Scotty Miller and Hill, the Bucs wideout reportedly ran a 4.39-second 40-yard dash at his Pro Day, while Hill reportedly clocked in at 4.29 seconds, so the Chiefs player has the edge on paper. But we all know that game day’s a different animal, so who would fare better if they really raced against one another? We tried to figure out by comparing their high school track races.

Buccaneers WR Scotty Miller claims that he is faster than Tyreek Hill.

Here is how they would have fared if they raced one another in high school: pic.twitter.com/uaTvB1zUTf

It’s hard to root against a guy like Scotty Miller — who is fast AF and would stand a good chance in a race against Tyreek Hill — but it’d be really hard to bet against the Chiefs wideout. While the two players won’t be on the field together during Super Bowl 55, it’ll be great to see which guy shows out and puts their speed on display, because both can absolutely fly.