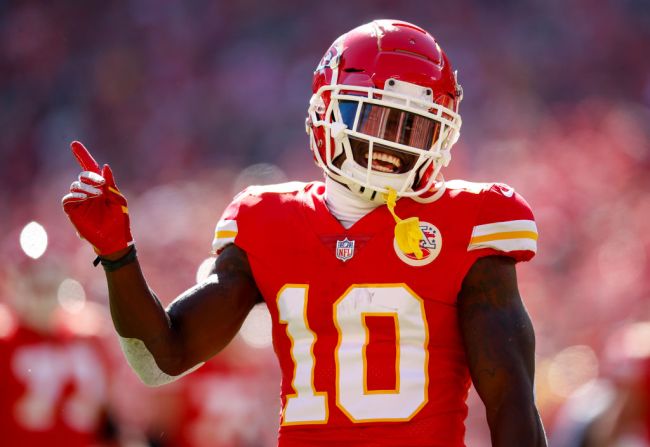 Tyreek Hill is the literal definition of a weapon out on the football field, but being drafted by the Chiefs in the fifth round of the 2016 NFL Draft has certainly paid dividends on his career. You have Andy Reid’s system benefitting him, Patrick Mahomes getting drafted the very next year, and the rest is pretty much history as the Mahomes-Hill link-up has become unbelievable to watch.

Having said all that, it’s not that wild to question whether or not the Tyreek Hill we know today would be the same player if he was drafted by another team. ESPN’s Mina Kimes wondered that exact thing on Twitter explaining that every NFL general manager wants to have a Hill on their roster.

Every GM wants a Tyreek Hill, but here’s my question: Does Hill have the same type of career if he doesn’t land in KC? https://t.co/gjNUIX3viw

Kimes’ tweet caught Hill’s attention pretty quickly as he responded less than two hours later, the thing is, Hill’s response didn’t make a bit of sense. “I will nobody will outwork me?” First of all, commas are our friends, Tyreek. Second of all, nobody was questioning his work ethic. Hill may be able to outwork anybody in the league, but there’s only one Reid and only one Mahomes. If Hill wrote ‘I would’ instead of ‘I will,’ then the tweet would’ve made a bit more sense, I guess.

I will nobody will outwork me https://t.co/S6P1EH7M3i

Spin zone: maybe Hill decided to say ‘I will’ because he figures he won’t finish his career in Kansas City, so maybe he’s saying that we’ll actually get to see that he’s the same type of player with a different jersey on.