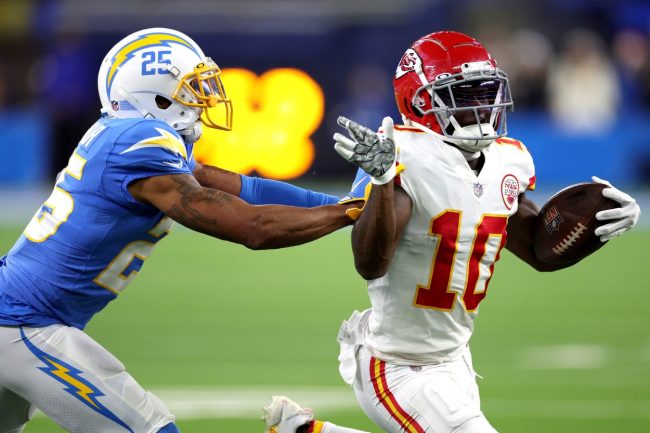 Thursday night’s NFL matchup between the Chargers and the Chiefs got out to a slow start but ended up being one of the best finishes of the year. At the forefront of that win was Tyreek Hill running one of the most ridiculous routes you will ever see.

After Kansas City defeated Los Angeles on the road in Week 15, everybody could not stop talking about Travis Kelce’s walk-off touchdown. However, it was the play prior that set things up.

Down by seven with one minute and 47 seconds left in the game, the Chiefs had the ball at their own 40-yard-line. Patrick Mahomes took a three-step drop from the shotgun and felt the pocket collapsing around him.

In turn, he shook a defender, stepped up toward the line of scrimmage and escaped to his right. Turning his eyes down field, Mahomes found Hill near the sideline and flipped the ball downfield for the completion.

Hill had at least three steps on his defensive back. He was wide open.

How Hill got to that point is impressive. The route that he ran is so, so filthy.

Hill came off of the line of scrimmage, began to break to the inside at five yards, threw his plant foot and cut back to the outside, threw a 360-degree spin to cut back toward the middle of the field and then broke free. Chargers safety Nasir Adderley never stood a chance.

The route could have been designed. It also could have been Hill’s superhuman spidey senses kicking in to know exactly where Mahomes was scrambling. If it was not a planned route, he would have had to recognize what was happening in that split second when he pivoted back, which is truly insane.

Kelce scored the game-winner on the very next play.

As the internet got ahold of the mind-boggling route from Hill, NFL fans lost their minds.

Who is covering this route? Lol pic.twitter.com/8nHwTEyME9

Jesus may have been able to walk on water but he would’ve had no chance in man coverage against Tyreek Hill https://t.co/U20k9TKbNc

That route by Tyreek Hill for that 20yrd catch tho.. 🔥

Tyreek hill with the nastiest route of the year

that route by tyreek hill omfg😭😭had buddy on skates

That route by Tyreek Hill was sick

Tyreek Hill snapped on that route