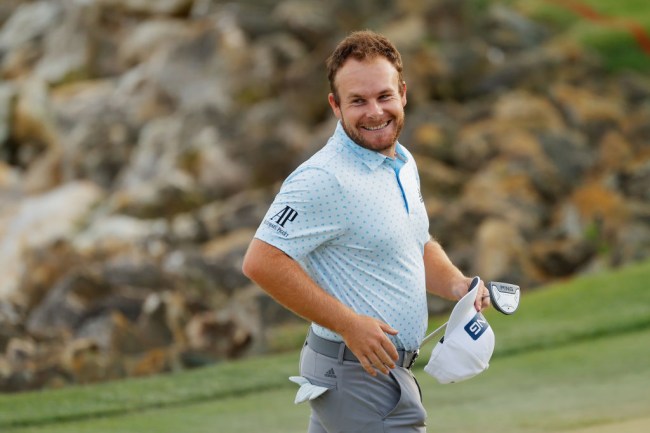 Tyrrell Hatton picked up his first PGA Tour win last week at the Arnold Palmer Invitational and as you would probably imagine, the Englishman celebrated by having a few beverages.

During a press conference at The Players on Wednesday, the 28-year-old explained what all went down following the victory.

“Sunday night celebrations, there was a lot of red wine and then, but unfortunately, the finisher was drinking vodka and tequila out of the bottle, which never kind of ends well.”

After describing just what types of alcohol he consumed on Sunday, Hatton revealed that the next morning wasn’t too fun saying that he was “cuddling the toilet” at 5 AM.

Tyrrell says he was "cuddling the toilet" at 5AM after his win Sunday night.

He certainly isn’t the first nor will he be the last first-time PGA Tour winner hugging a toilet hungover as all hell the following morning.

The No. 22 player in the world has been red-hot since returning from wrist surgery. On top of beating Marc Leishman by a shot last week at the Arnold Palmer, Hatton has finished no worse than T-16 in his three other starts on Tour this season.

He is certainly a player to keep an eye on at The Players this week given his great form. He ranks first on Tour in strokes gained: approach and strokes gained: tee-to-green. To say his game is in a great spot would be a gross understatement.

Related: The Players Preview: Picks To Win, Contend And Fade