You Can Own The Same Throne Tyson Fury Rode To The Ring On For The Low, Low Price Of $2,200 On Amazon 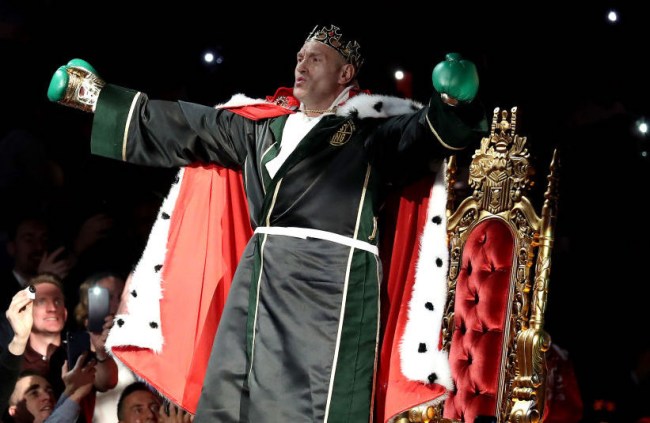 There are plenty of fundamental differences between pro wrestling and boxing but they also have a fair amount in common, as anyone who steps into the ring to take part in either activity does so knowing there’s a good chance they’ll leave it severely more concussed than when they entered.

In addition, anyone who wants to make it to the top of either sport needs to be both an athlete and an entertainer, as you’re not going to last very long in the WWE if you lack the ability to cut a promo and any boxer looking to maximize their purse needs to know how to drum up excitement and publicity for any bout they partake in.

There are some tried and true ways for fighters to achieve that goal, whether it’s turning to some good, old-fashioned shit-talking or getting into a shoving match at a weigh-in to entice viewers to tune in to watch you and your opponent actually beat the crap out of each other.

Over the weekend, Deontay Wilder and Tyson Fury faced off against each other in Las Vegas for one of the most hyped-up heavyweight bouts in recent memory after their first fight in 2018 ended in a draw.

While most fights kick off with boxers walking out to the ring with their hood above their head while their entourage proudly displays any belts they might have, Wilder and Fury decided to make their entrances a bit more theatrical than usual, with the former donning a 45-pound costume and the latter opting to be carried out on a golden throne like it was an episode of Monday Night Raw.

THE GYPSY KING ON HIS THRONE! 👑

Based on his comments following the fight, it appears Wilder regrets his choice of attire, as he said the heavy outfit tired him out enough to contribute to him losing after his corner threw in the towel in the seventh round.

Fury, on the other hand, made the wise choice to conserve his energy prior to his fight when he tasked his team with tracking down a throne for him, and according to Sports Illustrated, they search far and wide before stumbling upon the perfect one on Amazon:

We knew Fury was a showman. On Saturday night, he didn’t disappoint. He wore a robe with a crown on his head. He rode to the ring on a throne. When Top Rank found out how he wanted to enter the ring, they searched local stores. When they came up empty, they found one on Amazon.

After a cursory search, I couldn’t find the throne in question listed for that price but I did find one that appears to be almost exactly the same as Fury’s listed for the incredibly reasonable price of $2,278.

If you want your throne to look the same as the boxer’s, you’re going to have to pick up some gold spray paint and get it reupholstered but you can thankfully use some of the money you’ll save on shipping for the necessary alterations, as the chair in question ships for free.

Christmas might be a long way away but I can’t think of a better gift for the fight fan in your life.