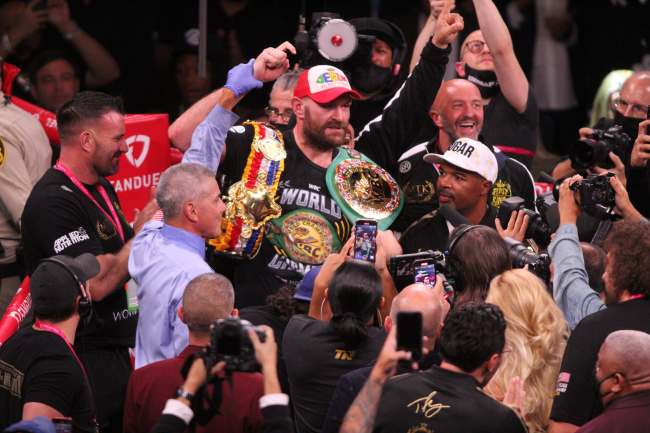 Tyson Fury and Anthony Joshua tried to set up a fight over the summer, but a judge ruled that Fury needed to fight Deontay Wilder for a third time before it could happen. That clearly hasn’t discouraged Fury from going after the fight with Joshua.

Last night, Fury at the O2 Apollo as part of his “Homecoming Tour” when he sang a song for the crowd that clearly indicated that he’s not done with Anthony Joshua.

Fury’s fans were quick to join in on the song. We all know Fury is a fan of some karaoke, but this song selection carries a bit of a different intention than that time he sang “American Pie” after beating Deontay Wilder.

Since that August fight between Fury and Wilder fell through, the two men’s careers have gone in opposite directions. In September, Joshua took on Oleksandr Usyk and lost his WBA, IBF, WBO, and IBO belts by unanimous decision. Joshua has already triggered his rematch clause to try and get his belts back. The fight is being targeted for some time next year.

In October, Fury brought an end to his rivalry with Deontay Wilder. He knocked Wilder out in the 11th round of a classic heavyweight battle. It brought his record to 2-0-1 against Wilder. Now he’s seeking his next challenge in the sport.

Right now, Fury is training his brother, Tommy, for an upcoming fight with Jake Paul, but it looks like he already knows what he wants to do once that fight is over.