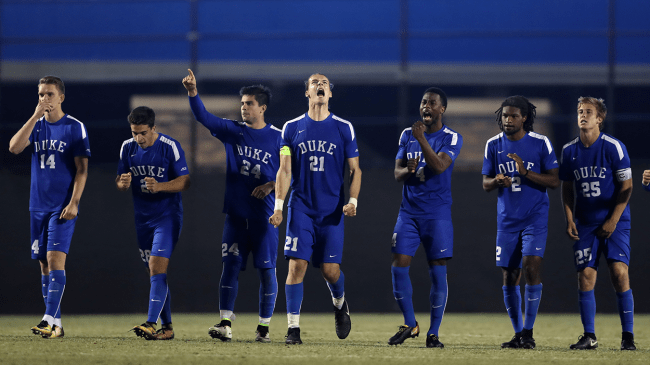 UCLA men’s soccer did not handle its loss in the second round of the NCAA Men’s Soccer Tournament with grace. In fact, the Bruins did the exact opposite.

The game itself was an all-time classic, but it ended in an ugly scene.

Early in the first half, UCLA took advantage of a rare opening in the defense, pushed into the box and scored the opening goal. The Bruins took a 1-0 advantage and the score held into the 86th minute.

However, after an unsuccessful dominant chase, Duke finally broke through with roughly 3:30 remaining on the clock.

Midfielder Nick Pariano played a service into the box and freshman Ruben Mesalles sent a weak shot right at Bruin goaltender Nate Crockford. Crockford could not hold on to the effort and allowed his opponents a second opportunity. Blue Devil defender Lewis McGarvey settled the ball and Mesalles scored on the second chance.

39 seconds later, Duke midfielder Peter Stroud contained a pass from Pariano and fired at net from outside the box. The ball deflected off a UCLA defender, just past Crockford’s outstretched hands, and in for a 2-1 lead.

And then things got chippy in a hurry.

After Stroud’s game-winning goal, Duke forward Thorleifur Ulfarsson had words for Crockford. Crockford didn’t like what Ulfarsson had to say and Ulfarsonn proceeded to mock Crockford for his failure to make the save.

Meanwhile, UCLA’s Pietro Grassi did not like Ulfarsson’s behavior. He came flying in out of nowhere and pushed Ulfarsson to the ground, starting a scuffle and earning an immediate red card.

His reaction when Duke took the lead in the NCAA Men's Soccer Tournament. pic.twitter.com/sOt7oAMXUz

The crowd, equally as fired up as the Blue Devils on the pitch, did not sit down for the remainder of the game and met Ulfarsson with a resounding ovation as he was subbed out in the final minutes.

“It’s part of the sport, and people are competitive,” Duke head coach John Kerr said of the incident. “That’s why you play, because if you’re just straightforward and you don’t have any emotion, you’re not going to get very far.”

No. 7 Duke went on to win 2-1 and advanced to the quarterfinals.