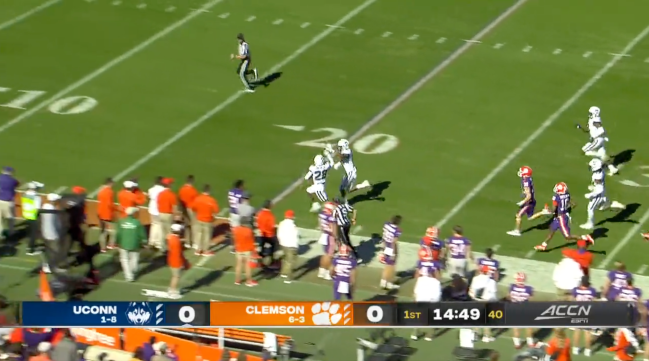 The 1-8 University of Connecticut Football team took a 7-0 lead over Clemson on the first play of the game. In real life.

During Saturday’s game between former conference foes, the Huskies received the opening kickoff. After fumbling the ball initially, running back Brian Brewton located his drop, scooped it up and took off running.

The 5-foot-7 freshman cut back at the five-yard-line to lose a defender and sprinted down the near sideline. He out-ran a diving tackler at the 20-yard-line and had nothing but open field in front of him.

With nowhere to go but the end zone, Brewton meets up with a teammate around the 35. The blocker, linebacker Tui Faumuina-Brown, proceeds to stick his hand out at the 27 and the two high-five at around the 21.

Brewton went on to score and the Huskies led, on the road, just 15 seconds into the game. It was an epic return and a savage mid-play celebration.

🚨 UCONN STARTS THE GAME WITH A 99-YARD KICK RETURN TD AT CLEMSON 🚨 pic.twitter.com/hHUHiX1sYC

Although “little ole” Clemson is not the team that it has been in recent years, for Dabo and the Tigers to be losing to a team as terrible as UConn at any point in the game is hilarious. And for the Huskies to rub it in by high-fiving during a live play is just that much funnier.

Look at the life get sucked out of the stadium in this angle:

BRIAN BREWTON TO THE HOUSE!!! pic.twitter.com/Flp1k9UPMg

The momentum was almost sure to swing the other way at some point, but at least we had this moment to share together.